A Song of Ice and Fire author George R.R. Martin confirmed on Thursday that HBO is developing a Game of Thrones sequel series about Jon Snow.

The Hollywood Reporter broke the news of the series last week to much surprise. There had been no hint that HBO would continue past the linear timeline of Thrones — each previously rumored project had been a prequel, set hundreds of years before the events of Thrones.

Martin says the series has been in development for as long as the other projects, which began around the time the original series ended in 2019.

He did, however, suggest he’s disappointed the news got out before HBO was ready to announce the series.

“This was not an official announcement from HBO, so it seems there was another leak,” Martin said on his blog.

Typically, networks wait to officially order a series before announcing the project to viewers. There’s still a chance HBO torpedoes this project entirely before its release, as it did with the planned White Walkers prequel series Bloodmoon.

Martin says he’s unable to share any details about the plot, other than that the show has a tentative title.

“Our working title for the show is SNOW,” Martin announced. 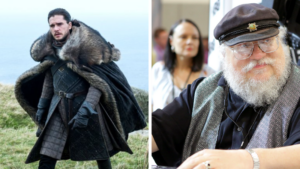 In addition, Martin confirmed that the show was Kit Harrington’s idea, which Thrones actress Emilia Clarke revealed earlier this week.

“Yes, it was Kit Harrington who brought the idea to us,” Martin’s post reads. “I cannot tell you the names of the writers/ showrunners, since that has not been cleared for release yet… but Kit brought them in too, his own team, and they are terrific.”

Adding, “Kit’s team have visited me here in Santa Fe and worked with me and my own team of brilliant, talented writer/ consultants to hammer out the show.”

Martin will be involved with the show in some capacity, perhaps as an EP like he is for House of the Dragon, the Thrones prequel series that debuts in August.

At the end of Thrones, Jon rode off beyond the Wall after he was exiled for killing Queen Daenerys Targaryen. So a series set in the far-North is more likely than a show that explores Jon’s attempt to return to the Six Kingdoms.

We explained this last week:

“Going to the other side of the Wall would require the inclusion of at least King Bran Stark and Queen of the North Sansa Stark. At that point, the show would essentially be the ninth season of Thrones.”

Both Martin and the leak specify this is a spin-off series about Jon, not a new season of Thrones.

Of all the post-Thrones projects in development — Dragon, 10,000 Ships, 9 Voyages, and Dunk and Egg — a sequel series about Jon Snow is the most exciting.