Like a 20-year-old with a fake ID, Joe Rogan had an “in.” The podcast heavyweight was at one point using his inside knowledge of the MMA world to best bookkeepers and fatten his pockets while simultaneously working as a color commentator for the UFC. In the moment, Rogan was winning at a Jordan-like clip, walking away with wins more than 80% of the time. 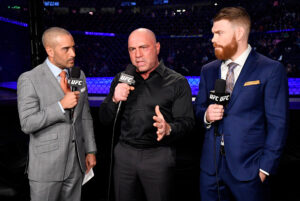 Rogan dropped the gambling truths while conversing with guest Bert Kreischer on his podcast, “The Joe Rogan Experience.“

“I used to gamble on fights when I was calling them in the early days of the UFC,” said Rogan. “’Cause there was guys that would come in from overseas…and I knew who they were and I would gamble on them.”

“I was like, ‘Is this bad?’ Like, I’m commentating and I’m also gambling. I don’t know if that’s smart because I don’t wanna be biased,” Rogan added.

Feeling uneasy about the situation, Rogan quit betting, and started offering his intimate knowledge of the sport to friends, telling Kreischer: “Guys would come in and I would say, ‘Oh my god, that line is totally wrong. This guy’s a killer.’ And we were at one point at 84 percent. Where I was just giving him the tips and he was gambling, eight out of ten I would call them right.”

Since he stopped wagering on MMA bouts, Rogan’s opted for a more lucrative roll of the dice. He bet on himself, bankrolling his podcast into a deal with Spotify that will reportedly pay him more than $100 million when all is said and done.