Joe Rogan likes the idea of Gov. Ron DeSantis running for president in 2024.

Actress Gina Carano asked Rogan if he was ready to endorse a candidate for the 2024 election, and he responded by saying that DeSantis would be a good fit.

If we told you that'd happen two years ago, what would you have said? pic.twitter.com/faNWbgIeXC

Carano: “Are you throwing out any support towards anyone or are you gonna hold off? “

Rogan: “I think Ron DeSantis would work as a good president. I mean, what he’s done for Florida has been admirable.” 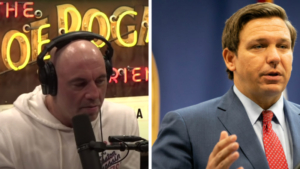 Rogan’s unofficial — I guess? — endorsement of DeSantis comes weeks after Elon Musk said he would consider voting for DeSantis if he runs in 2024.

Rogan and Musk voicing support for DeSantis is significant.

Despite what critics post on Twitter, Rogan, like Musk, is not a right-wing nutjob. Rather, he is a longtime Democratic voter who has grown concerned with the direction in which the party has pivoted. For context, Rogan endorsed Bernie Sanders, a far-Left senator, in 2020.

Still, Rogan could change his mind on DeSantis as much time remains between now and 2024. Specifically, Rogan could use his platform to promote Tulsi Gabbard instead. Rogan is a fan of Gabbard’s and has encouraged her to run for president again.

Moreover, DeSantis has not said if he plans to run. Former Trump aide Mark Meadows previously claimed that DeSantis will not run in 2024 if Donald Trump does.

So perhaps DeSantis will wait until 2028. Or maybe he’s built up enough momentum that he believes he can challenge Trump? Either way, the picture will become clearer following the 2022 midterms.

Rogan concluded that “[DeSantis] is not perfect. He is a human being. But um, what he’s done is stand up for freedoms. There was some weird gaslighting s–t that went on where people equated freedom and saying the word ‘freedom’ to like right wing bigotry and hate.”

That type of honesty is why Rogan has more influence than the corporate press. And therefore why an endorsement from Rogan would prove more valuable than when the media inevitably campaigns for a Democrat in 2024.