Decision Desk HQ is the first major outlet to declare Joe Biden the winner of the presidential election with over 270 electoral votes.

At 8:50 a.m. ET, the outlet officially projected that Biden had won Pennsylvania and its 20 electoral college votes, to put the former vice president at 273.

The TV networks are yet to call the race, but all are inching toward a Joe Biden victory. 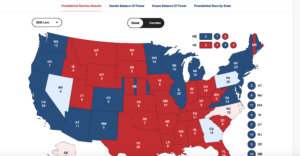 Byron York, a columnist for the Washington Examiner, told Fox News that Joe Biden’s victory could come by the end of the day.

“I think it actually could come today,” York said. “That doesn’t mean the president comes out and concedes today. There will be a lot of pressure on him to do that. But we’ve had races in the past where the losing candidate did not concede for a while. Waited for some challenges to take place. Waited for what’s called canvassing to take place in a lot of local areas. So it doesn’t mean everything is wrapped up in a string. But it appears to me that Biden reaching 270 is getting pretty darn close.”

President Donald Trump is disputing the map projections that show Biden in a commanding lead:

The Trump campaign this morning: pic.twitter.com/mLrdGLu3GT

Check back to OutKick for all election updates.