Jim Harbaugh was hired to be the Michigan football head coach on December 30, 2014, and Wolverine fans gleefully imagined an immediate return to national prominence. Trips to College Football Playoffs. National championship games. How do I know? Guys handing out samples at Costco told me so. Seriously. Costco Wolverines couldn’t stop running their mouths about how it was their time and that Jim was going to overrun the conference with real “Michigan Men,” not some Brady Hoke recruits.

“There’s disdain from the process by some. To us that’s the whole ballgame,” Jim Harbaugh said about Michigan on Monday. “I think sometimes outside of the program, I think people are very results-oriented. The process, to us, is very important.”

Oh boy. Talk about a kick in the nuts to the Costco sample guys.

According to USA Today, Harbaugh is the fourth-highest paid head coach in college football, making just over $8 million a year. Yet here he is, in the middle of a 2-4 season, telling fans to chill out on the results and concentrate more on the process. Let that sink in, Michigan Man. This guy who is 0-5 against Ohio State, 11-16 against ranked teams, 2-12 vs. top ten teams and 0-4 in bowl games is telling you to calm down and let things play out.

“There is growth. There is improvement,” Harbaugh told WXYZ’s Brad Galli. “There are aspects that are improving. I do believe there is progress being made.”

This is the sound of a guy who’s not going anywhere. Get comfortable, Michigan fans, this guy isn’t quitting on his school.

The simple question someone needs to ask Harbaugh: When should fans expect to see results from the process? How many years will they have to wait for that Big Ten title, something that hasn’t happened since 2004? There’s no need to get nasty here. Simply ask how long this process thing he’s talking about should take.

"There's disdain from the process by some. To us that's the whole ballgame," Jim Harbaugh said about Michigan on Monday.

"I think sometimes outside of the program, I think people are very results-oriented. The process to us is very important." pic.twitter.com/JTCbJqVPaL 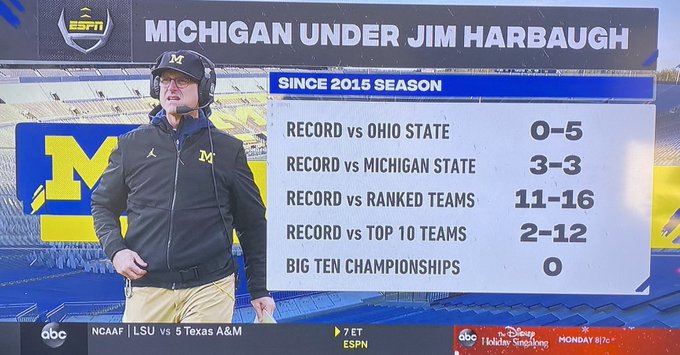