After jerking viewers around with his legal analysis for 20 years, Jeffrey Toobin quit CNN.

“I didn’t think other people could see me,” Toobin told CNN after he returned from an absence following the eventful virtual meeting.

While the New Yorker fired him, CNN allowed Toobin back at the network.

Shortly after his return, Toobin hilariously told Kyle Rittenhouse that he’s lucky it is not “illegal to be an idiot.”

“What kind of idiot 17-year-old gets a giant gun and goes to a riot?” Toobin ranted. “The good news for Kyle Rittenhouse is that he’s not on trial for being an idiot, he’s on trial for homicide.” 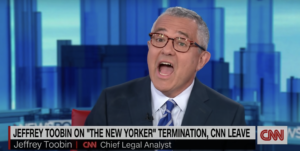 Only at CNN can a guy who masturbated in front of co-workers over Zoom tell someone else that they’d be locked up if being an idiot were a crime.

It’s unclear why Zoobin left CNN. Perhaps new boss Chris Licht’s edict to tone down the wacky partisanship got to him. We knew there’d be a handful of CNN personalities unable to adjust to a news-first pivot, maybe Toobin is the first.

Toobin must be rather confident in his market if he’s quitting a high-paying job on television. We’ve compiled a short list of destinations that could show interest in a shady legal analyst with a naughty past:

Hopefully, Toobin can quickly get back on the horse to break down the future legal developments surrounding the raid at Mar-a-Lago.