We create strong passwords that we then frequently update to avoid vicious hackers. You know the drill: one upper case letter, a few numbers, a special character, and (most importantly) no personal information.

It’s essential to follow these practices. If not, strategic hackers will log in to your Twitter account, pretend they are you, and inaccurately congratulate a coach on becoming the first coach of color for their respective team. That’s the plan.

Though there’s a sucker born every minute, ESPN’ Jay Williams prays there’s more than just one.

As it relates to the Boston Celtics tweet that came from my account a couple of hours ago… I did not post that & my passcode has now been changed. 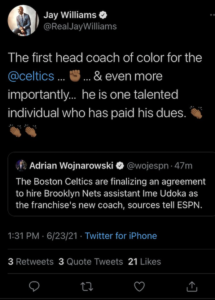 I hadn’t seen such a poorly executed spin-job since Mark Cuban last tweeted.

Here’s Jay Williams’ likely conversation with himself, once he realized his error:

I got a great idea: say you were hacked. You’ll be off the hook. Now, think of something else to tie to race and hope ESPN promotes you for it.

Such an original thought.

Please, please, use a strong password. The hackers who got Williams could next target you.

By the way, how many “I was hacked” excuses does a person get? Does everyone get at least one? Do I get one? There’s a chance that I will one day tweet something stupid after leaving the casino on a Friday night. Thus, I’d like to have my excuse proactively written.

What’s strange about this story is that it didn’t have to happen. Jay Williams wasn’t in any danger, and ESPN would never address anyone who implies racism negatively. (They instead fire legends like Mike Golic, who can’t blame racism.) At worst, Williams would’ve been mocked for 12 hours for his original tweet. But now, because of his failed spin-job, people can mock him for at least 24 hours.

In all seriousness, Twitter has ingrained a mindset that demands perfection from public figures.

Williams’ first tweet was a mistake, which we all make.

Had Williams made this same mistake on live radio or TV, he would’ve returned after the commercial break to correct it. As a result, the story would’ve lasted only a few minutes. But because Williams posted the error on social media, he could not bring himself to admit it. He instead panicked and made it worse with an overused, ineffective lie.