Lost in the infamous late-night battle between Jay Leno and Conan O’Brien was a discussion between ABC and Leno that would have pushed back Jimmy Kimmel’s airtime.

Kimmel appeared on the Bill Maher podcast Club Rando this week to talk about the inner workings of the shakeup that almost was:

For background: Leno and O’Brien signed deals with NBC in the early 2000s to ensure a peaceful transition of Tonight Show power between Leno and O’Brien in 2009. But when the time came, Leno was not ready to give up his late-night stardom.

And according to Kimmel, the gossipers failed to uncover that Leno was in serious talks to move to ABC and compete head-to-head with the Tonight Show.

The move required Kimmel’s approval because his contract stipulated that his show would air at midnight ET. If Leno had moved to ABC, it would have pushed Kimmel’s start time to 12:37, the start time of the NBC Late Night series.

Kimmel says Leno would frequently call him to sell him on the idea that ABC could build a late-night juggernaut around the two. And the convincing worked. Kimmel eventually agreed to move time slots in favor of Leno.

So why didn’t it happen? At the last minute, Leno signed a new deal with NBC to host a late-night-type program during the 10 pm hour. Kimmel adds that Leno never told him he changed his mind and wasn’t coming to ABC.

“I never heard from him again,” Kimmel told Maher.

Ultimately, Leno moved to the 10 pm hour on NBC and torpedoed the lead-in ratings for the O’Brien-led Tonight Show.

Neither Leno nor O’Brien had success under the new structure, thus causing NBC to move Leno back to Tonight and buy out the remainder of O’Brien’s contract. O’Brien moved to TBS following his departure from NBC. 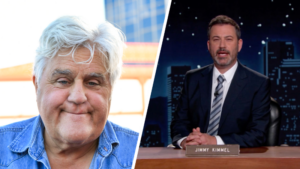 Leno signing with ABC would have changed the late-night dynamic. To this day, ABC has never built out a full late-night lineup to compete with CBS and NBC.

Ironically, the future of late-night on ABC is again up in the air. Kimmel recently appeared on the Variety’s Awards Circuit podcast and teased ending his program.

“Eventually, I am going to have to stop doing this. I’m not going to do this forever,” Kimmel said. “I would not be honest at all if I said that I have decided one way or the other. I’m thinking about it a lot, though.”

ABC does not appear to have a succession plan for Kimmel but did feature a series of guest hosts last summer during Kimmel’s summer-long hiatus. Guest presenters included ESPN commentator Stephen A. Smith who has said on record that he is angling for a late-night program.

And who knows, if Kimmel leaves, maybe Jay Leno, at 72 and eight years into retirement, will finally make his debut on ABC.

Am I kidding? I hope so. Though we put nothing past Jay Leno.