Jackie MacMullan will retire from ESPN at the end of August, OutKick has learned.

August 31 is scheduled to be MacMullan’s final day with the network, when she will appear on Around the Horn one last time. Since joining the ATH rotation, MacMullan has recorded nearly 900 appearances on the show.

MacMullan joined ESPN in 2010 as a senior writer. Since then, MacMullan contributed to a variety of ESPN platforms, including SportsCenter, Outside The Lines, ESPN.com, ESPN the Magazine, and Around the Horn. 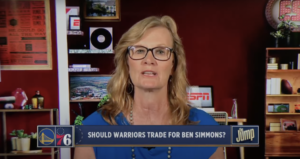 MacMullan, known for her NBA coverage, is scheduled to appear on The Jump for the final time this afternoon. In 2010, MacMullan received the Curt Gowdy Media Award from the Naismith Basketball Hall of Fame.

Sources add it was her decision to leave ESPN.

Congratulations to Jackie MacMullan. What a run at ESPN — what a career. Much respect. Best of luck to her.