Hugh Freeze has quickly built the Liberty football program into something respectable. The Flames are 4-0 this season and are fresh off a 40-7 victory over Louisiana-Monroe. That success has them in a position where they’re receiving top 25 votes as a independent, Group of Five program.

It’s the first time in school history that Liberty has received votes to be in the top 25. The eight votes that got for the AP Poll might not seem like much, but it is a very big deal.

Freeze has been the driving factor behind the turnaround. The former Ole Miss coach has brought with him his offensively philosophies and schemes that made him such a huge success on the field for the Rebels. In fact, it was off the field issues that led to his departure back in 2017.

Since then, Freeze has been trying to get back into major college football. And his recent success with Liberty might land him that Power-Five job here’s been searching for. His offense is currently ranked No. 24 in total offense, averaging 442.8 yards per game and 6.04 per play.

Surprisingly, the run game has been the focal point, and it’s led to a massive amount of success for Freeze and company. They currently rank No. 7 in the nation in rushing yards per game (250.75).

The Flames are currently leading Syracuse 28-14 early in the second half. Once again, it’s been success on the ground that has driven the dominate offensive performance. Liberty has already racked up 290 yards on the ground compared to only 68 for the Orange.

These types of performances are going to eventually start getting the attention of major Power-Five programs. In fact, SEC teams such as Auburn or South Carolina could have interest if things continue to trend in the wrong direction with the current coaches.

Let’s not forget that Freeze is one of the few current coaches to have multiple wins over Nick Saban during his time at Alabama. Those wins also came in back-to-back seasons, something that hasn’t been done by any other coaching going against Saban since he arrived in Tuscaloosa.

In other words, he shouldn’t be at Liberty long. 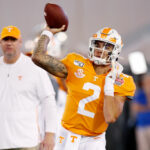 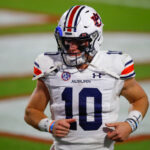