Okay, be ready, this is one of those old school “Game of Thrones,” reviews where it’s possible I get a ton of things wrong. Long time readers of this column will recall that I once got the entire battle at the wall wrong because I didn’t understand what side of the wall everyone was on.

I could lie and do a ton of research and read what everyone else says about tonight’s episode, but that’s not what I do here, I just dive right in and tell you exactly what I wrote down as the show aired.

So let’s start where the show ended, essentially what we have is an old dying king who has lost track of time and finally answers Rhaenyra’s question about The Song of Ice and Fire while he’s talking to Queen Alicent. Meaning she believes he’s made a deathbed confession that he wants Aegon on the throne, but really he has simply lost track of time and is trying to answer Rhaenyra’s question from the prior night.

But here’s the deal, if Queen Alicent really thought this confession was happening and he was changing his choice of heir, wouldn’t she bring in other witnesses? (Although, to be fair, her father, the hand, will certainly lie for her.) Because otherwise wouldn’t everyone just claim their preferred heir was named at the last minute and the king changed his mind?

Anyway, we’ll return to this at the end of the review, but for now let’s go back to the beginning. 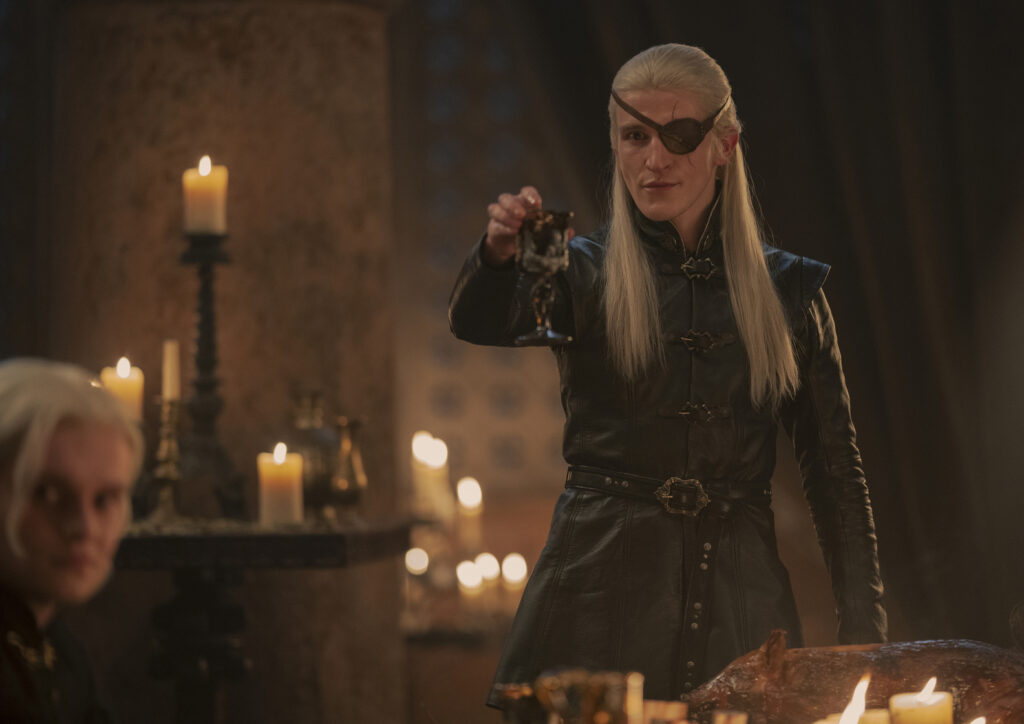 1. Lord Corlys is near death and his successor at Driftmark is in question.

First thing I may get wrong, did Corlys die in the episode?

I think the answer is he didn’t die. (But he may have died.)

And I hate when they give you news in that parchment they show, in cursive no less, on the screen for like five seconds. No one can tell what those things say without pausing the television and reading it sideways.

So I’m still not sure if Corlys is dead or not.

I had the sound turned up to epic levels, but it felt like every damn line in this episode was a whisper. And I couldn’t figure out how to turn on the closed captioning because I don’t know how to work any of our remotes in the Florida house. (I know, I know, first world problems. I already told the kids they aren’t allowed to put on the streaming services on the main TV because I don’t know how to get it back to basic cable when they do that. I don’t know how to use remotes now and I’m only 43. When I’m 63 I’m not going to be able to use anything in the house.)

So, anyway, I think this entire episode was premised on the fact that Lord Corlys might die and he hasn’t died yet. Unless he did and I missed it.

He just has a bad fever on the inside and might die, right?

2. Lord Corlys’s brother wants to be the heir if Corlys dies.

I was never able to figure out this guy’s actual name, but his head gets chopped off in the final fifteen minutes of this episode so I’m not that worried about it now.

Anyway, when he’s still alive he’s very focused on the fact that the Velaryon name can’t end up sullied by the bastard children of Rhaenyra.

So he wants the Driftmark seat.

And I think Daemon and Rhaenyra have two kids and she’s pregnant with a third. And the two kids appear to be named Viserys and Aegon, but that might be wrong too.

Oh, and we’ve flashed forward another six years to allow more kids to be born and new actors to play the would be heirs.

What’s clear is they are actual Targaryen children because they are both blond.

Rhaenyra and Daemon return to King’s Landing to fight for their second eldest son, I think his name is Luc, to be the rightful heir to Driftmark.

Queen Alicent gives her gold and the abortion tea.

Then Alicent storms into Aegon’s bedroom — does the would be king ever wear pants? — rips off his bedsheet to reveal him naked beneath the sheet and says, “You’re no son of mine.”

5. Prince Aemon, now with a nifty eyepatch, is a one eyed dueling impressario.

And there’s Ser Criston Cole, still devilishly handsome, but serving no purpose as a character at this point, getting beaten in a duel that seems, to be honest, quite dangerous.

The two brown-haired nephews, Jace and Luc, reminiscence about their time in King’s Landing, remarking that the training grounds used to feel much bigger.

6. The Queen Who Never Was, wife of Corlys who may or may not be dead, travels to King’s Landing too.

Rhaenyra offers to wed her two children to the granddaughters of Laena because we know both of them are Velaryon. Before that she says, “I did not order his death (Laenor’s) nor was I complicit in it. I swear this to you.”

This squares with my theory from last week that Rhaenyra and Daemon were doublecrossed by Laenor and his lover and believe he’s actually dead. Otherwise why would Rhaenyra continue to lie about what happened here to his mother? Wouldn’t she just tell the mom he was really alive?

The conversation ends with the QWNW appearing to reject Rhaenyra’s offer.

7. On a dark and stormy night Rhaenyra sits by her father’s bed and asks him about “The Song of Ice and Fire,” prophesy, does he truly believe it?

Rhaenyra begs for King Viserys to defend she and her children.

The speech causes the king to demand a late night hearing, but then somehow that doesn’t happen — Otto Hightower, his hand, attempts to give him the tea, but the king rejects it. So then what happens here?

Because it feels like we wait and a day and then Otto is sitting on the Iron Throne hearing the claims for the Driftmark heir when King Viserys makes a dramatic entrance and ponderously strides to the throne wearing a gold mask to hide his disfigurement.

“I will sit the throne today,” he says.

Before he can make it to the throne, his crown falls off and Daemon picks it up and assists him to the throne.

8. King Viserys stops the arguments and asks to hear from the Queen Who Never Was.

The QWNW endorses Rhaenyra’s suggestion of a merger of the two houses, Rhaenyra’s two bastard children with Daemon’s two children and the king pronounces it a good plan.

Why does the QWNW endorse Rhaenyra’s plan after rejecting it the day before? I have a theory below.

9. But Corlys’s brother is not pleased with this plan.

“That is no true Velaryon and certainly no nephew of mine,” he says. “You will not decide the future of my house.”

But then he goes farther.

Too far, it turns out.

“Her children are bastards and she is a whore.”

King Viserys demands his tongue, but Daemon has already chopped his head in half. (This is actually more grotesque than a decapitation, honestly.) Then Daemon deadpans, “He can keep his tongue.” 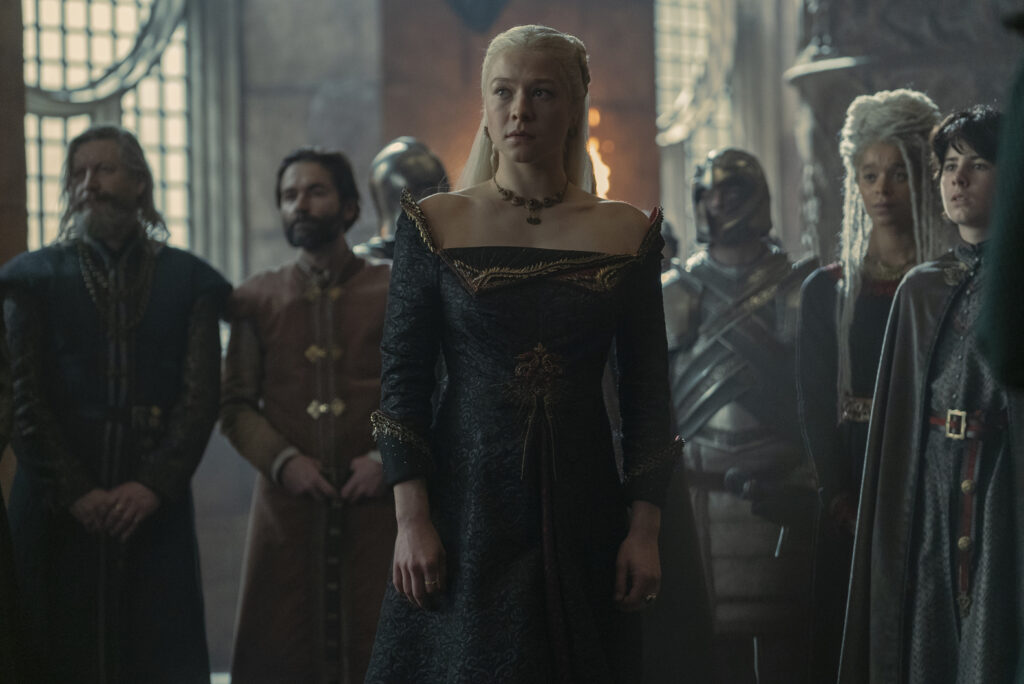 10. Back to Lord Corlys, it feels like he’s going to survive and demand vengeance for this.

Because otherwise who is going to be angry here?

We see the QWNW standing guard over his body as it’s prepared.

One thought, did she know what would happen and does she actually want to sit on the Iron Throne? Did she gamble that Corlys would survive and he’d be enraged by what happened to his brother?

11. We move, quite impressively, from the table with the dead body laid out to the royal family table.

King Viserys takes off his mask — his eye socket is empty and half his face is gone — and asks for his family to get along as he gives a toast. “Tonight I wish you to see me as I am,” he says.

12. Inspired by her father’s toast, Rhaenyra rises and thanks Queen Alicent for her treatment of her father and expresses gratitude and offers an apology.

Alicent responds in kind with her own toast, saying “We are both mothers and we love our children. I raise my cup to you and your house. You will make a fine queen.”

Aww, how sweet, maybe everyone is going to get along.

But Jace, manages to avoid being offended, and offers a decent toast before the king is carried out.

Then a pig arrives on the table and Jace laughs at Aemon, who rises and gives a toast calling the future king and his two brothers “handsome, wise and strong.” Then, to echo it more clearly, he then continues, “three strong boys.”

They are STRONG boys, that is, their father is named Strong.

Maybe all of you are geniuses and got it immediately.

I thought they just all hated each other because, you know, Aemon got his eye stabbed out and didn’t like being called boys.

Anyway, the families separate and the moment of union is brief and fleeting. 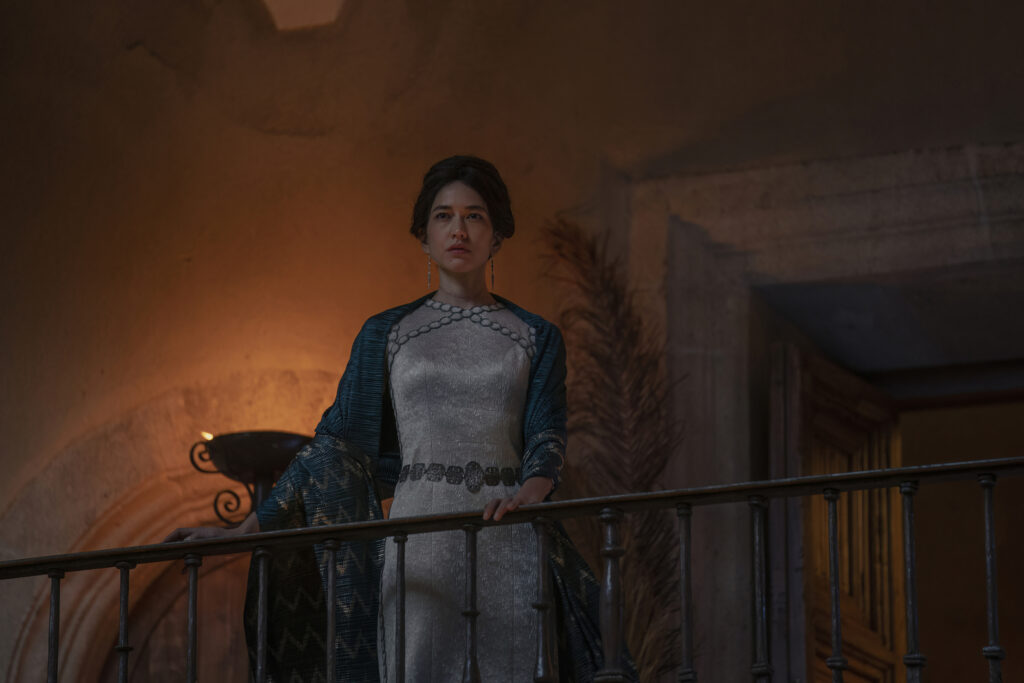 14. There’s also a new red witch who seems to be influencing Alicent to remove Targaryen symbols and replace them with religious symbols, could it be Melisandre herself?

I don’t know, how long did she live?

15. We end with the king, having solved all issues of descent, creating them anew by confusing Queen Alicent and Princess Rhaenyra and answering a question from the night before.

I think this sums up things pretty decently.

At least as long as Lord Corlys is still alive.

We know next week’s episode, the next to last, is all about the king dying and the succession battle beginning anew.

So buckle up for that one.

FYI, I’m traveling for the next two weeks, but I’ll be back home for the season one finale and I promise to do another live reaction show then.

See you next week.

Game of ThronesHouse of Dragon