The premiere episode of “House of the Dragon” drew over 10 million viewers, an HBO series debut record.

Like its predecessor, “Game of Thrones,” “Dragon” felt like a sporting event. Users tweeted about it in the moment, as if each scene were a play or quarter. There were live reaction shows to break down the episode like a marquee football matchup.

Westeros is the only remaining piece of TV monoculture. And in many ways, more popular than sporting events.

10 million viewers tops regular season averages for all leagues but for the NFL. It also edged the average of the past three NBA Finals, 2020 to 2022, which drew around 9 million viewers.

Before you say that’s only a small victory for dragons, consider the difference in distribution.

The NBA Finals airs on ABC, a broadcast network in most homes across the country. “Dragon” airs on HBO/HBO Max, a premium service for which users have to pay directly.

Bars and restaurants carry each NBA Finals game, a number ABC has counted over the past three years. HBO does not have out-of-home viewing. 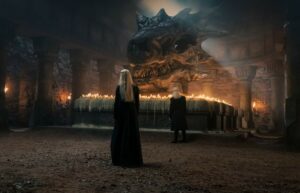 Television watchers stumble across what’s on ABC in primetime by accident. HBO subscribers must go out of their way to find “Dragon.”

(“Dragon” didn’t quite top the World Series in the same three-year time span, averaging around 12 million viewers. Yes, MLB remains more popular than the NBA, despite what ESPN tells you.)

Viewers watch the NBA Finals and other sporting events live or on a slight delay. Meanwhile, shows like “Thrones” and “Dragon” draw viewers throughout the week.

While “Dragon” averaged 10 million viewers on opening night, another 10 million came in days later. As of Thursday, HBO says over 20 million people have watched “House of the Dragon” and expects the number to grow over the weekend.

First-day viewership of “Dragon” will wane as the season progresses and on-demand viewing grows. Still, with 20 million viewers in four days, even a fall of 50% would keep “Dragon” ahead of most live games.

The Rhaenyra vs Daenerys debate is more interesting than Steph vs. Jordan, anyway.