Tennessee is making a quarterback change for today’s rivalry game against Florida. According to a report from Matt Zenitz of Al.com, true freshman QB Harrison Bailey is getting the nod versus the Gators:

One other Tennessee QB note:

Jarrett Guarantano, the starter in Tennessee's first seven games, missed some time while having to quarantine but is expected to be available for the game today, as @JimmyHyams noted yesterday. https://t.co/j6r72DC8Tx

Bailey was a five-star recruit out of Georgia, and was ranked by Rivals as the second-best pro-style quarterback in the high school class of 2020. Bailey had appearances in games versus Auburn, Arkansas, and Kentucky, but this is his first start for Tennessee.

Bailey replaces Jarrett Guarantano, who has fallen off since last season in yards per attempt, going from 8.4 YPA to just 6.7. Guarantano has also thrown two-thirds as many interceptions (4) as touchdowns (6).

Over at our partners at FanDuel, Florida is a 17.5-point favorite over the Vols today. 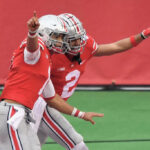 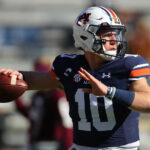