The pellet grill vs. Blackstone debate sure got the juices flowing around here

Wow, it turns out that a bunch of guys in their early 30s to retirement age and beyond who read Screencaps are incredibly passionate about how they cook their meats. I knew the Texas contingent was passionate, but this topic set off a firestorm of emails that finally settled down late last night as guys went to bed with dreams of smoked meats running through their brains.

Look, I haven’t made up my mind here on which way I’ll go. There were so many incredible closing arguments from each side, but I will say that the guys who are using combo setups really caught my eye. The emails typically came in as “I have the best of both worlds.” And that intrigued me. I like to think I’m a middle-of-the-road guy. Do I enjoy the thought of smoked sausage and sauerkraut on a cold January afternoon while watching the NFL? YES.

Do I love the thought of whipping up a quick big boy breakfast for my sons like I’m a Waffle House griddle master? YES.

I’m really starting to think that the middle-of-the-road Screencaps readers may have won the debate here. They weren’t meat militants. They weren’t screaming about making five pounds of vegetable stirfry like they were hibachi chefs.

Stay tuned. I need to make a purchase soon as the old, normal gas grill is gone.

• Mike T. in Idaho, who’s pretty much a long-lost uncle at this point, sent an email Friday where these Traeger guys are SMOKING LEMONADE! I’m telling you, these Traeger guys are relentless. Guys, I’m just looking to eat, not impress suburban moms wearing those wide-brim hats moms are wearing these days like they just parachuted into Santa Fe, NM for an arts festival. 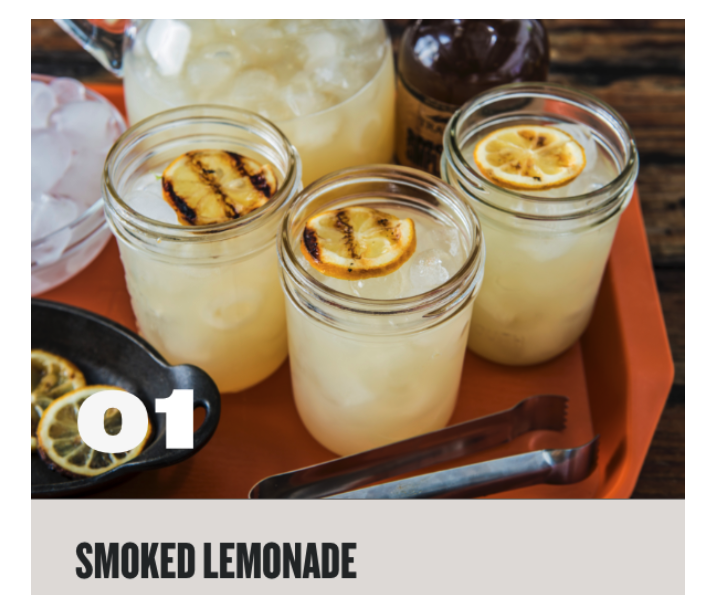 • I hadn’t heard from Kurtis J. in NW Ohio for a few weeks, but then out of nowhere he fires off a TNML report on a Friday:

While it wasn’t a Thursday, the sweet sound of the mower purring never sounded so good. Each step finally getting a quality cut in was more refreshing and relaxing than ever. You see, life has come at me hard the past month or so in good ways and bad.

TNML got pushed several weeks for a variety of reasons from super long workdays (in this case good), a family visit (good), a kidney stone (wow bad) and to top it all off a faulty ignition switch on the mower completely ruining my last Thursday after finally getting healthy. Luckily I have my fellow TNML offensive lineman Ryan S. on speed dial.

There aren’t too many manly projects that are a big deal to him and he not only diagnosed the problem, but made the final electrical configurations needed to allow me to enjoy this night of mowing more than I have in a long time. Through all this I always looked forward to reading your column and picking up a laugh and small tips (antifreeze in the portable bball hope base) along the way. Here is a pic of the fresh cut, but more importantly the new switch. Thanks for your work! 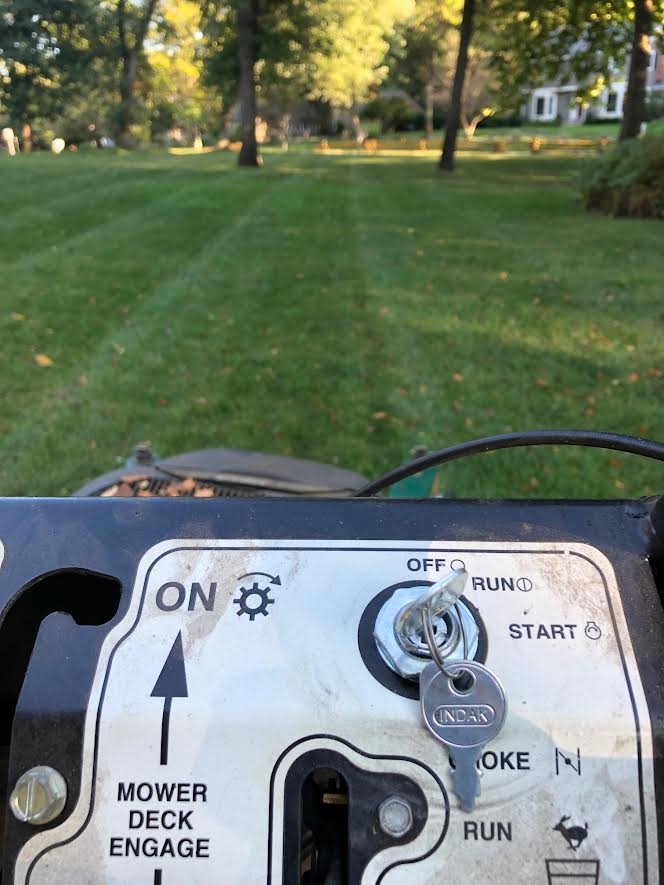 • Ken H. wanted to get in on the ‘What’s the Best Purchase You’ve Made Lately’ topic:

Hi Joe, Sorry to be a little late with my recommendation.  You mentioned the best purchase you made recently was a basketball hoop for the kids.  The next best purchase you will ever make is a stencil so you can spray paint a key, free throw line, and 3-point line.
Murray Sporting Goods Basketball Court Marking Stencil Kit for Driveway, Asphalt or Concrete | Stencil Spray Paint Kit for Backyard Basketball Court
Every driveway in my neighborhood has a hoop, but all the kids come to my house to play because they say it feels like a real court.  It’s pretty easy to do, you need to buy upside down line paint at the big box store and a cardboard stencil, and it will take a couple of hours on a non windy day, but your kids will be forever grateful!  Also I’ve loaned mine out to many friends and they were very grateful to use it.
Thanks and love reading your column every day!

• Beau in Toledo has some essential reading for those of you who may be going through the September bee problems.

I was out on the Job the other day, wearing my high-viz vest because of the nature of my employment (my Parents always joked to me, “go play in traffic, Boy!  I managed to find a way to get PAID to do it!), and was being constantly harassed by yellow jackets.  I knew it was the “safety” vest attracting them, so I tried to ignore them as best as I could.  Still couldn’t help but to think of the League Members and The Struggle.
While knocking out a double (yard)-header of Friday mowing, I started to think of why I’m *not* seeing a lot of yellow jackets in 3 of the 4 yards I mow a week.  I did a little research after opening a fresh 24-count box of DaddyPops and the laptop when I realized a common denominator: Plants.
Are we shocked that the best way to balance Nature is Nature??
Aside from the homemade decoy nests listed in this link Drive Away The Wasps With Yellow Jacket Repellent Essential Oils, Sprays, And Plants! – Yellow Jackets (pestcontrolplus.biz)
(or search: “scents to drive away yellow jackets” and peruse at your leisure), 3 of the 4 yards have some of the plants listed.
Seriously, if you have the Thyme, plant it. (was that a DadJoke??)  Basil is in 3 of the 4 yards.  Marigolds work too, although the rabbit deterrent thing is b.s., because I have a decent patch next to the driveway that the rabbits hide IN.  Also, wormwood is an ingredient in vermouth and absinthe, so get your distillation skills sharpened!  Pennyroyal makes the skeeters mad, as well.  Be careful with the spearmint though, that isht spreads like Horseradish and it’s hard to kill.  Made the mistake with the Horseradish; anyone want some?
Apparently, hot peppers drive yellowjackets away as well, and since I’m growing a few in the range between ancho poblanos and Carolina Reapers, I’m willing to bet the “science is settled” on that one.
Side note: I still have a LOT of the relatively harmless big fat fuzzy bumble bees in all 4 yards, so no need to worry about harming the helpful pollinators.
Enjoy the weekend!  I plan on smoking many of those hot peppers before I dehydrate them; adds a great note to the grind I make!
• Now I’m off to a soccer game in the rain, then lunch, an IKEA bed build for my youngest son, college football and I might even fold some towels today. It’s not the most glamourous Saturday, but not all of us can go on a 12-weekend bender like Clay! The good news for him is that today’s OutKick bus stop is at Vandy. He was able to sleep in his own bed last night.
No clue how Clay’s keeping up his schedule. Here I am stressed out over a grill debate.
Have a great Saturday…and send in photos of what you cook up today. I need suggestions.
Email: joekinsey@gmail.com

Juan Soto in 22 September games for the @Nationals:

The last player to match or exceed all of those numbers over any 22-game span was Babe Ruth in 1923.

Real Housewife of the 419: pic.twitter.com/dndl9cyKB8

In a bizarre ending, @PantherPride305 defeats @ColumbusFtball 7-3.@MikeJacksonjr_ catches the interception but drops the ball in the end zone which is recovered by Columbus. The last play of the game is ruled an interception and end of game. @FootballHotbed pic.twitter.com/tJDW3qcHQG

Got my grandpas tailgate table, brings back amazing memories in Ann Arbor on fall Saturday’s pic.twitter.com/yxcrf2RHct

@GolfChannel has two microphones. One for the players. One for Jimmy.

They are separated by 1 foot.

I mean you can’t make this stuff up 😂 pic.twitter.com/NRRO54a4Dc

There is history said Rick pic.twitter.com/fDxqYTwGec

Nearly $17/hr to be a cashier here in Ohio…with benefits. pic.twitter.com/kRBhW9hcRr

I couldn’t decide between wings or pizza. I made both. Don’t let choices take you down. pic.twitter.com/alRmF2umIb