OutKick has learned that Greg Gutfeld will be moving to 11 p.m. ET weekdays. With the move, Fox News @ Night with Shannon Bream will shift from 11 p.m. to 12 a.m.

Gutfeld will remain a co-host on The Five at 5 p.m., OutKick is told.

FOX News Media CEO Suzanne Scott made the announcement during her quarterly address to all employees. A formal announcement to the press is expected this afternoon.

Sources have said for weeks that Fox News has discussed moving Gutfeld’s political satire program, The Greg Gutfeld Show, to the weekday lineup. The show currently airs weekly on Saturday nights. A new Saturday show at 10 p.m. will be announced at a later date.

The Greg Gutfeld Show will debut at 11 p.m. in the weekday lineup in the second quarter of 2021. 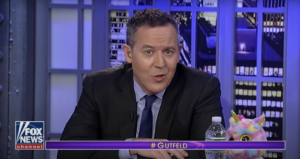 Moving Gutfeld is the latest move in Fox News’ post-election lineup that includes a new opinion hour at 7 p.m., currently hosted by a rotation of personalities. A permanent host for Fox News Primetime will be announced at a later date.

Gutfeld is one of the most popular personalities on Fox News because of his distinctive, witty comments and reactions. The move positions Gutfeld and Fox News to compete with other late-night talk shows.