As OutKick first reported, Fox News is expanding Greg Gutfeld’s presence with a Monday-Friday late-night show at 11 p.m. ET that debuts tonight. Gutfeld sat down with OutKick to discuss that, how he got the job, late-night TV, media, and cancel culture.

Bobby Burack: What can viewers expect with Gutfeld? It says late-night, you don’t have much in common with the current batch of late-night hosts, most of whom are really struggling right now.

Greg Gutfeld: Well, Bobby, you know who I am on The Five. It’ll be like a mixture of news, humor, and irreverence. In truth, it won’t be too different from the weekend show. It’ll just be higher in frequency, which means more guests. It will be faster, faster pacing, and a bit more reckless than the weekend show.

As for the other guys in late-night — I don’t watch them. I don’t watch them at all. So, I wouldn’t even know what they do. I have no idea what they even think. I assume they kind of all feed off the same assumptions, which give anybody, including me, an opportunity to go after people who don’t like that type of entertainment or information.

The problem with these other TV shows, these late-night shows, is they tend to make fun of half of the audience. I’m not interested in that. Let them do that.

Burack: What’s the preparation for a show like this? You are still going to do The Five daily, which airs from 5-6, breaking up the day and prep.

Gutfeld: You are right. So, I’m usually always writing. I get up in the morning, and I see what interests me and I’ll talk to the producers about those topics. If they fit, I create an outline and start writing about that topic.

The thing is, Bobby, as you know, stories change throughout the day. You might have this long segment, then breaking news comes at four o’clock that changes everything. It’s all about finding what connects with the viewers.

I believe a show like this is important right now. I’m trying to find a way to accommodate people who have been going through a lot of problems, and that means not making light of them but giving them an escape. Talking about them in a real way. Making them laugh. Providing that place of humor. I’ve been trying to do that for a while with The Five, to energize viewers during the pandemic.

We realize people are really, really hungry to return to a normal life, which includes laughter. Maybe that’ll happen this year. And I can help.

Burack: The new show will have a live audience. How involved will the audience get in the show? Eventually, you will get a crowd that doesn’t have to socially distance.

Gutfeld: Yeah, I think that it’s going to be a challenge. A challenge to make it sound like a regular audience when it’s going to be a smaller group. They are going to have to observe all the strict protocols and restrictions. So, I’m cautiously looking forward to that part, but I don’t know how it’s going to look at first.

I’ll find out tonight, I guess. The crowd will definitely be doing the social distancing thing. By the way, do we even know what that means anymore? Six feet still? Three feet? I’ve lost track.

But they should come. It will be fun. 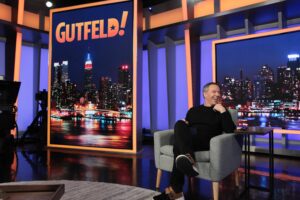 Burack: Greg, when I reported this story about your new show, I frequently got the question: Who will be on the show with Gutfeld?  I assume Kat and Tyrus will still be on?

Gutfeld: Oh, wow, that’s great to hear about Kat and Tyrus. At least I think. Kidding. They’re going to be part of the show, and we’re going to be able to have, maybe, two other guests. We will do some one-on-ones as well.

There are so many interesting people in the podcast world that I’d like to bring on. I’d love to, actually. What I’m not interested in is bringing in some actor to talk about his new movie — that bores me.

A good guest is someone that I can have a real conversation with. Tell a few good one-liners. Someone who always has that in their pocket, and someone who knows when to drop them. Those are the people I’m looking for. People who don’t let the joke lead the conversation, because then you have people competing for jokes. It’s about timing.

I want to bring on people who are not on other shows. Not the ones making the rounds. I’m going to bring on guests who take risks. We have more slots to take risks now. And we will.

Burack: Will any features of Red Eye that weren’t incorporated into the weekend show make the cut?

Gutfeld: I love this question. There might be. Sure. The truth is, a lot of that Red Eye stuff just kind of happened. You didn’t know if it was going to work or not. We did some crazy, crazy stuff. Oh my.

You really don’t know what will hit until you try it. Until you take the risk. We tried it all on Red Eye — some of it, somehow, worked.

We also did a lot of really weird things on the weekend show. It was different, of course. That ship was crazy too. But less so because it was just once a week. When it’s day-to-day, it can’t be as perfect. You take more chances.

We are going to try a lot of new things on the show. Maybe some will seem somewhat like Red Eye, maybe not. The great thing about the five-day-a-week frequency is that you get to experiment with it. We are going to make mistakes and see how it goes.

Burack: Let’s go behind the scenes. How did the new show come about? I’m assuming Fox News approached you. If so, when did the conversations start?

Gutfeld: So, this idea had been kicked around for a while. I met with [Fox News CEO] Suzanne Scott and she said, “Don’t worry, this is going to happen. We are gonna do this.” But they weren’t sure when.

That was the first stage. I heard about it, talked about it, then waited. I had no idea when or if it actually would happen. In reality, I wasn’t sure it was going to happen, but Suzanne said she was pushing for it.

Eventually, the weekend show began to grow, and Fox could see the numbers going up. Suzanne was making sure that was a priority.

Many things were impacted along the way. Eventually, in the past year, Fox News committed to it. This has been an on-and-off discussion for at least a year-and-a-half to two years. Actually, maybe even longer.

Burack: When you got into the business — whatever you call it, media or political satire — who had influenced you the most?

Gutfeld: Now, that is interesting. I never saw myself like this, what I’m doing now. I just saw myself as a writer and an editor. A packager person. Someone for magazines and stuff like that. I was never a comedian. I never went on stage, so I never could call myself one. I believe you have to go do stand up to earn that title. I guess I was a humorist, a humorous writer. I enjoyed that.

Growing up, I loved National Lampoon. That was an influence on me in terms of creating something funny and great. In my early years, I spent time looking at [David] Letterman in his early years. I saw that as just the perfect show. Everything worked. Brilliant. It had an incredible recipe for chemistry.

I was influenced by surprises, not knowing what to expect. Letterman had that. There were also great people like Chris Elliott, who would always deliver something unusual. It worked, whether it was stupid pet tricks or stupid human tricks. You knew he was odd, but his bits were great.

Overall, there’s no doubt that early Letterman inspired me the most. The pre-CBS Letterman, to be exact.

Burack: I wrote a column last week about cancel culture, which 64% of Americans say is a threat to their freedoms. No two industries have been hit harder or are more petrified of cancel culture than comedy and media. Are you afraid of it?

Gutfeld: That is a shame. It is such a shame that there aren’t more people in the realm of speech, whether it is comedy or media, who will come out and say something about this. They don’t because they are scared of losing their jobs. It’s wild.

But, I’m not afraid.

You see Bill Maher now coming out against it a lot, which is refreshing, coming from him. There are other comedians that will talk about it, but they’re of a libertarian-type median.

I will say this, everyone has the potential of being canceled. I do, you do, we all do. Cancel culture is not about the person getting canceled — it’s about the type of person doing the canceling. It’s a very small, mobile group of people. You could probably count them, in the United States, 1,000 total, I’d say. But to corporations, they feel much bigger, have much more impact.

People are so afraid of what they see on Twitter, or what they could see. They pretend that it matters the next day in real life. It’s so awful.

Burack: Do you read what’s said about you on Twitter or care about the platform?

Gutfeld: I used to, sure. I don’t anymore, and it’s a healthy thing. I don’t care about it or look much about what is said about me.

At this point, I basically use Twitter just to retweet stuff that I find interesting or to promote stuff. It’s funny, I used to treat it like a video game. I’d send out a tweet and see what kind of response it’d get. It was like this fun, weird little game I played. But then I realized, “Why am I doing something for free that could get me into trouble?” That wasn’t smart, so I stopped.

I try to focus on the things that matter to my career, that’s part of the job. Finding what matters and what doesn’t. Twitter really doesn’t. Don’t waste your time on this stuff.