I’m no goose expert, but I live near a pond so it’s my duty to hypothesize about what went down at Sunday’s Dbacks-Cubs game when a goose lost it and attacked another goose right there on Fox Sports Arizona. Cubs outfielder Rafael Ortega found himself in a precarious situation where he had his back to a goose who was clearly in the mood to fight and then it happened.

In my semi-professional opinion, it is my theory that we have a male-on-male fight over a potential baby mama. It’s that time of year when the humping commences so there are 800 goslings taking their good old time crossing the street during a Memorial Day weekend beer run. The male goose who put the legwork in over the winter hunting down his baby mama clearly isn’t in the mood to deal with some potential side piece slipping into the mix, and it’s time to ATTACK!

There is just something about @Dbacks and birds.@Cubs outfielder Rafael Ortega should most definitely WATCH HIS BACK.

Remember, geese are monogamous. All it takes is some young goose rolling into town after spending the winter getting jacked and you have all the makings of a goose street fight. Yes, goose divorce does happen, but it’s rare. It’s my semi-professional opinion that the young goose who’d been working out all winter tried to hit on the wrong married woman and the old man of the house wasn’t having it.

“Divorce in Canada geese is caused when one of the partners in the pair is willing and able to reproduce in a particular year, but its mate is not,” Michael Conover of Utah State University told PBS in 2019.

The good news Sunday is that no geese were murdered by a Randy Johnson fastball, so all in all it wasn’t that bad, even with the street fight breaking out. Nature happens, and we’re here for it. 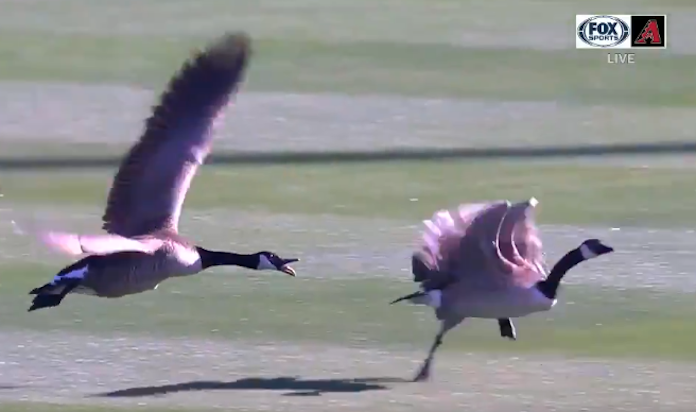