Poor management and even worse pay generally doesn’t equate to a happy workplace. And in the case of a group of GameStop employees in Lincoln, Nebraska, their perceived mistreatment, and unhappiness led to a mass exodus and free marketing for the competition.

Opting to be about it rather than talk about, four GameStop employees quit at the same time, announcing their departure via a note on the store’s door inside of Lincoln’s Gateway Mall.

Due to an obvious lack of staff, the video game retailer was forced to shut its doors to would be gamers seeking an extra controller or a $7 used game credit.

The unhappy employees weren’t playing games with their resignation note, announcing their move in the first line: “We regret to inform you that we all quit.”

There’s something beautiful about the simplicity of the message. 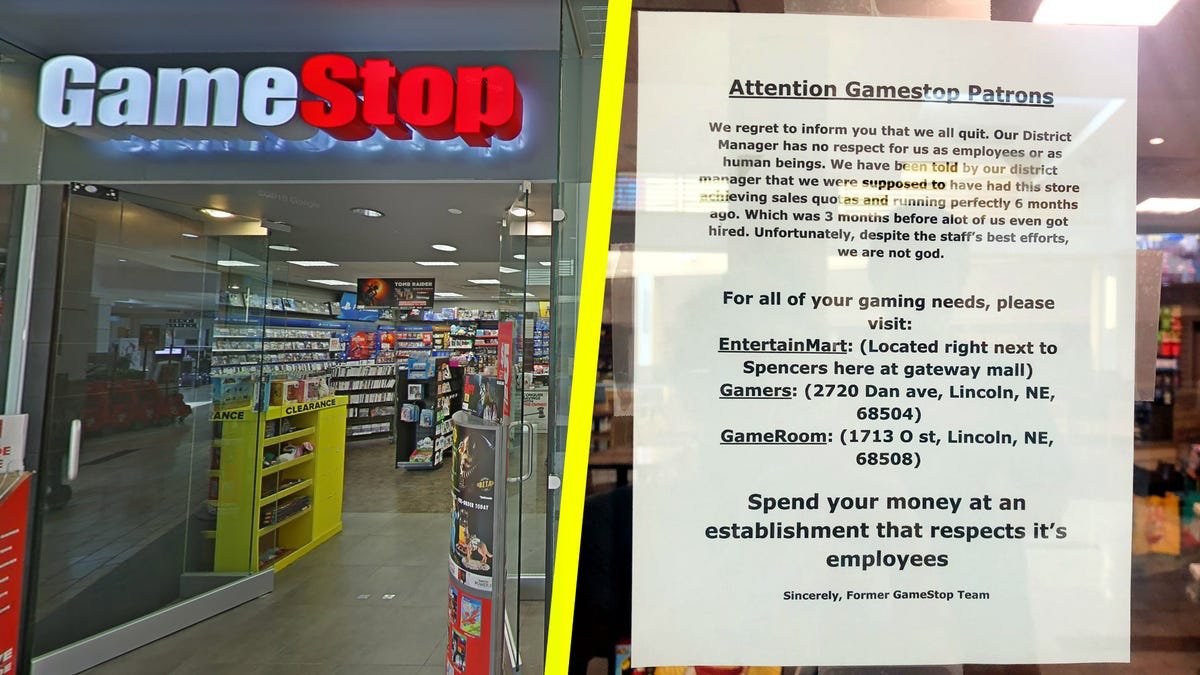 It appears as though the GameStop employees were tired of having their buttons pushed by management. They were united in stating they were expected to perform like a higher power and their best efforts were met with disrespect.

“Our district manager has no respect for us as employees or as human beings. We have been told by our district manager that we were supposed to have had this store achieving sales quotas and running perfectly months ago,” the note said on behalf of the employees. “Which was months before a lot of us even got hired.

“Unfortunately, despite the staff’s best efforts, we are not god.”

Though it’s easy to assume the quartet of walkouts are typical millennials shying away from a full day of work, consider the following:

Many industries, notably those within retail and customer service, are extremely understaffed and underpaid. People are being asked to take on additional hours and responsibilities for the same pay and additional stress.

Furthermore, even those who haven’t had the discomfort of wearing a 100% cotton, ill-fitting GameStop polo, coupled with a required lanyard draped over their necks, have likely suffered through having to take orders from a superior earning considerably more while doing considerably less.

Frank Maurer, the store’s manager pre-walkout, told Kotaku that the stress and anxiety associated with the job became so overbearing that he had trouble sleeping. “For my health I had to leave,” said Maurer.

Upon their exit, the four disgruntled employees displayed their version of the blood code (’90s kids know what’s up), choosing to pump up GameStop’s competitors via their own rendition of A, B, A, C, A, B, B.

“For all of your gaming needs, please visit…” the note continued, listing the names and addresses of three local gaming stores.

The note concluded by stating: “Spend your money at an establishment that respects it’s (sic) employees.”