Gallup has been tracking of Americans’ view of various business sectors for 20 years. They released their latest poll results on Tuesday. It’s worth taking a look at the whole thing to see for example that the farming and healthcare industries had double-digit percentage favorability gains year-over-year. Sports had a precipitous fall since last summer, especially among Republicans and Independents. See the chart below: 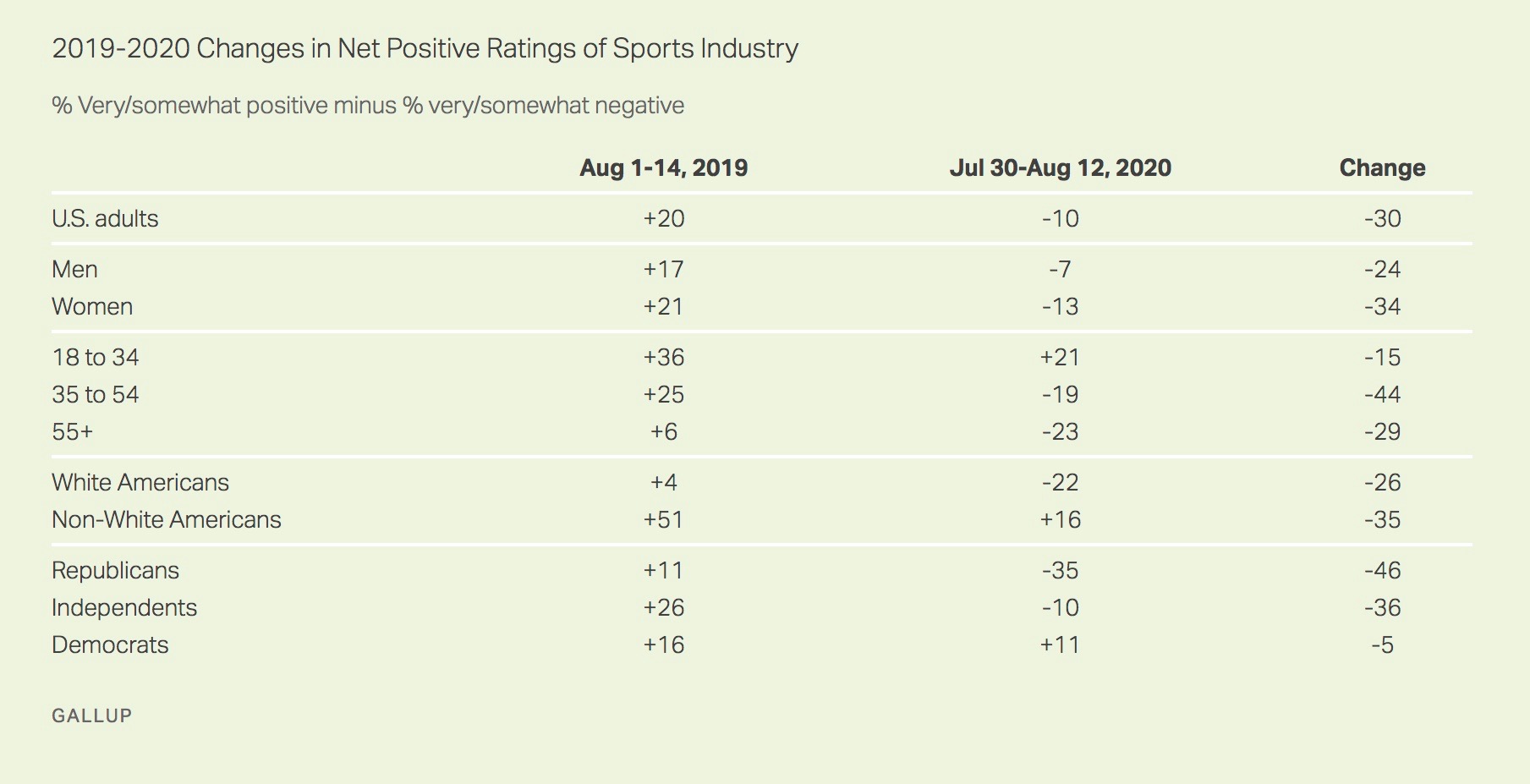 1,031 American adults were polled, all 50 states and Washington DC were represented in the data, and the poll was conducted from July 30th through August 12th.

The part that really pops out is the view of Republicans and Independents. Republicans went from +11 to -35, a 46-point drop. Independents went from +26 to -10, a 36-point drop. Perceptions dropped more among women than men; perceptions also dropped more in points amongst non-white Americans than white Americans, but because of how positively non-white people viewed sports in 2019 it’s still net +16 among that group whereas it’s now -22 among whites.

Bear in mind this poll concluded before the NBA players’ strike for a couple days in the playoffs in the wake of the police shooting of Jacob Blake in Kenosha, Wisconsin.

Of the 25 industries listed, the only ones with a worse net negative rating than sports in aggregate are pharmaceuticals (-15) and federal government (-20).

“Sports has been acutely affected by the twin events steering news and culture in 2020: the pandemic and the renewed movement for racial justice,” Gallup writes. “The sports industry’s relationship with fans has been disrupted by the need to shrink its seasons and schedules and play to empty venues as a means of keeping fans and players safe. At the same time, the greater social and political activism of players and, in some cases now, coaching staffs and entire leagues appears to have turned off Americans who disagree with their messages or the way they express them. The net effect at this point has been negative for the industry’s image.”

The inevitable question is whether and to what extent these worsening perceptions will impact TV viewership for sports. NBA is murky. Viewership of playoff games in the first round was down 27 percent per game versus last season and 40 percent versus two years ago. However, in addition to the Black Lives Matter messaging being ubiquitous during the games, the sport is out of its typical season and many games this year aired in the middle of the afternoon when fewer people watch TV.

The remainder of NBA and MLB, the launch of college football, and the true bellwether that is the NFL — which is a ratings behemoth compared to all other sports, and frankly everything else on television — will also be difficult to draw apples-to-apples comparisons from. This is because out-of-home ratings are included in next-day viewership now whereas they previously were not. These metrics could yield double-digit gains or more and could conceivably offset or mostly offset the losses of viewers who tune out due to distaste for the immersion of sports and politics.

Outkick founder Clay Travis discussed this poll on his radio show this morning: