Bills fans are so enraged with New York Governor Andrew Cuomo and his plan to attend Saturday’s game at Ralph Wilson Stadium that they’re hammering away at a Change.org petition to ban the coronabro from attending.

“I’m going to take my test, I’m going to be out there to watch the game with you, and we look forward to it,” Cuomo told Bills owners Kim and Terry Pegula during a recent announcement that 6,700 fans would be allowed into the stadium under state orders.

As of Tuesday morning, the petition to ban Cuomo was quickly approaching its 15,000 signature objective. Petition organizer Jeffrey Dorenzo is pretty clear with the message here: Cuomo has done everything within his power to prevent people from living their lives and now he wants to join in on the fun.

“So Cuomo is going to attend our playoff game after telling us that we can only attend at less than 10% capacity? If he thinks he has more right to a seat in that stadium over people who have waited over 20 years for this opportunity, then people better be there to protest his entry,” Dorenzo said. “This is OUR team! This is OUR home. We don’t want you here.”

Fans wishing to attend the Colts-Bills game will have to produce a negative COVID test that was taken within 72 hours of entering the stadium. Then, after the game, fans will be subjected to contact tracing. That’s right, contact tracing after a negative test.

Tickets went to season ticket holders. If the Bills win on Saturday, people attending the game will not be allowed to attend further home playoff games this year to make things fair for others who wish to attend.

Erie County Executive Mark Poloncarz, who has been a complete pain in the ass from day one of the NFL season and hates the thought of fans attending games, is threatening people who even think of tailgating before the game. Mark has dropped hints that private lots that allow tailgating will have their permits pulled and they won’t get them back.

Oh, and people will have to fork over $63 for the COVID test that will allow them entry. Fail the test, and you’ll need to find someone who can pass to scalp the ticket.

Add it all up and you can see why Dorenzo and the people gladly signing a petition to ban Cuomo are so mad. This is the team’s first home playoff game since December 28, 1996, and they have to go through all this in order to support the local franchise.

So go sign that petition. Tell Cuomo to keep his loser ass at home in Albany.

A small sampling of how Bills fans feel over Cuomo’s plan to attend Saturday’s game: 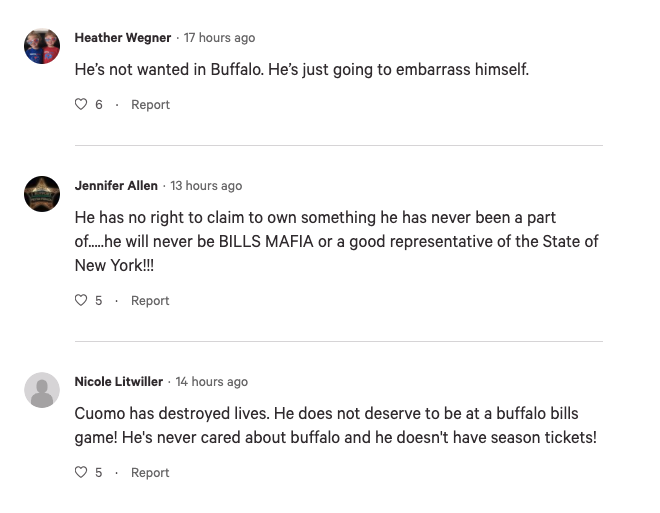 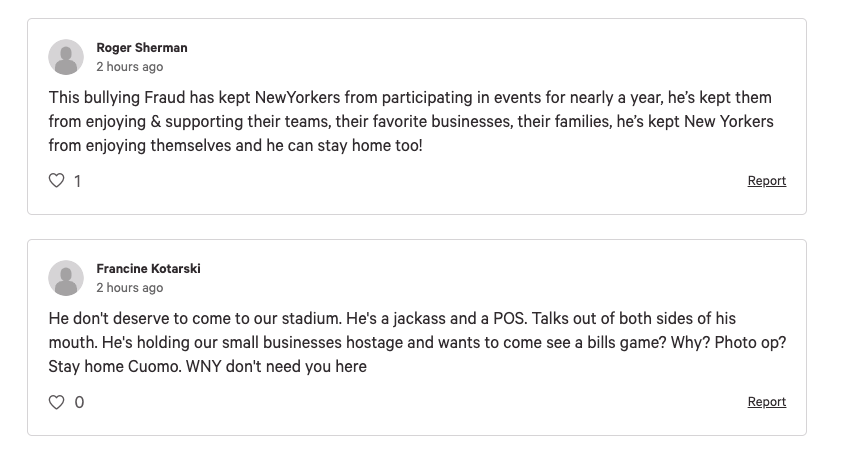