…and it was the best decision I’ve made in a LONG time. What a beautiful night in NW Ohio: Temps in the upper 70s, no wind, clear skies, shorts, t-shirts, bug spray, patio margaritas and wings. Throw in Ohio State playing a competent Minnesota team, and it was one of those nights where social media wasn’t needed.

And how about that full stadium in Minneapolis. The hair on my arms was standing at attention at how beautiful that was. Even Big Ten Commish Kevin Warren was maskless and celebrating the return to full stadiums.

• CJ Stroud will be just fine. People act like the 19-year-old should just walk in and win a Heisman. There was no need to hear from Twitter experts on how Stroud was a bust or anything dumb like that.

• Minnesota felt like an 8-4 team that would play New Year’s Day in something like the Outback Bowl before the running back went down.

• It’s good to see the Tag Team commercial back. No need to update a classic like that one.

• I don’t know how many Thursday night Ohio State games my body can take these days. Thankfully, it’s back to Saturdays from here on out.

• The kids were devastated they couldn’t stay up and run the neighborhood like they typically do for Ohio State Saturday night games. Sorry, kids, it was a school night.

Gotta say, Joe, this is what makes ‘Screencaps’ and OutKick so special: instead of always focusing on what’s ‘bad’ about the U.S. (much less the world at large) you instead focus on what is great about our nation and the Earth we live upon. Your frequent pics of ‘PureMichigan’ and that fantastic house on the shore of a Montana lake are the proverbial cherry on top of this effort!

I think I speak for most married men with families that our wives and kids top the list of what bring us joy day in and day out. For me personally, as the father of three girls, I got extra lucky in that my kids chose to play sports and allowed me to be an assistant coach on their respective soccer teams growing up.

But when they played high school sports, though, I got the chance to be the game announcer for their field hockey/soccer teams. Nothing like cranking up classic 80s tunes for warm ups (Journey/Separate Ways, Foreigner/Juke Box Hero, Golden Earring/Twilight Zone) on the stadium sound system, reading off the starting lineups, and then blasting ‘Enter Sandman’ by Metallica when they took the field to start the game.

And of course playing the National Anthem before each varsity game, with everyone standing: not a knee taken in disrespect anywhere by anyone in the stadium.

They are all in college/graduate school now. But the school still lets me be an announcer. It’s an honor and privilege to bring what I hope is a little fun to their high school sports matches. And in the bargain being an announcer has given me a slew of great memories to treasure of my girls battling it out on the pitch as well.

Keep doing what you are doing, Joe! Chronicling your battle against the ‘Army Worms,’ encouraging neighbors to share garage beers and watch sports. We need more of this in our nation right now.

• Loyal reader Mike in Idaho stopped by the Spirit of Boise balloon event Thursday morning and sent some photos to show how he’s finding joy this week. Mike also told me this week about the tiki bar he used to have on his patio. 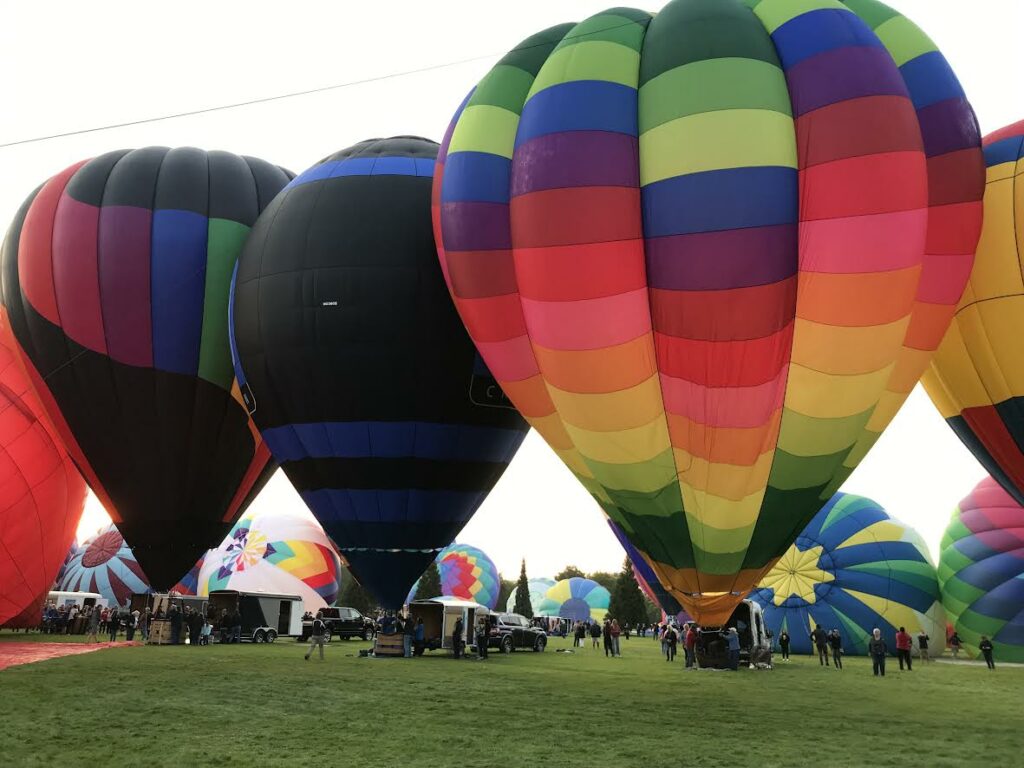 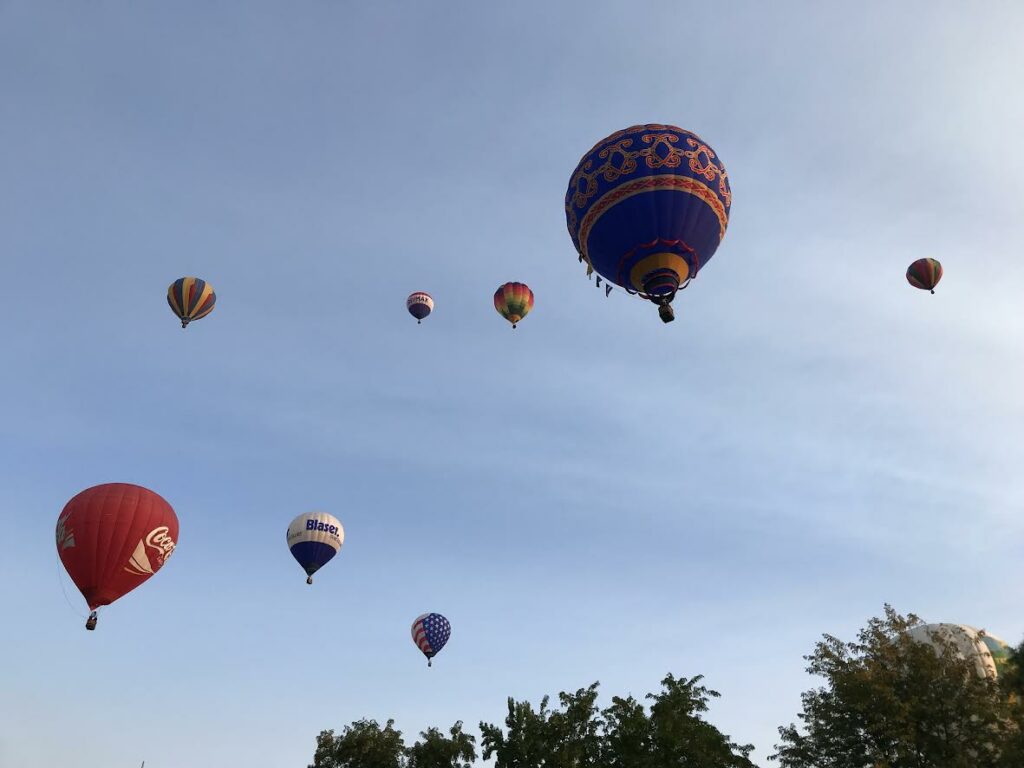 • Michael J. wrote to me Thursday looking for an 8th member for his Gauntlet league and I ended up joining. Just like that. It was the first time Michael J. has ever sent me an email and now we’re about to be opponents.

• I’ve been asked all week about the Gauntlet rules that Tim in Texas has set. Here we go…if you have more questions, I’ll forward your email to Tim and you can ask the founder all sorts of questions.

Each player is assigned 100 points to buy 4 teams in the auction. Returning champ starts the auction by nominating any team he wants. Then bidding begins. So, he’ll say, “I’ll take the Saints for 15 points.” Then anyone else can outbid him until a final price is reached for the Saints. Then 2nd player nominates a team and so on until all 32 teams are taken.

Typically, the very top teams go for around 60 points, and the bottom teams go for 1-5 points. The main thing to keep in mind is you have to keep at least 1 point in reserve for each team you have left to buy. So, you can spend 97 points on the TB TomBradys if you like, but then you only have 3 points for 3 teams left. By the way, I predict TB doesn’t finish this season as their starter. He may or may not be effective. Nonetheless, his season ends with a trip to IR-osteporosis.
Last rule is tiebreakers. 36-39 collective wins for your 4 teams is the normal range for the league winner. It does always come down to the last week between the top couple players. If 2 end up with same amount of wins, we tiebreak by whoever has the one team with the most wins. If my top team had 13 wins and yours had 12, I win. If that’s still a tie, it goes to 2nd team with most wins. If that’s still a tie, it goes to 3rd team with most wins. If that’s still a tie, it goes to pistols at dawn.
Email: joekinsey@gmail.com
Let’s go out there and have a great Labor Day weekend. I might catch one day of the Solheim Cup and spend the rest of the weekend with the family and watching football. Remember, Screencaps IS BACK for Saturdays and will go back to seven-days-a-week when the NFL returns next Sunday.
Make sure you’re tagging me on social, emailing content, and keeping your eyes open for Screencaps material.

This one starts slow and then really gets cranked up 😲 pic.twitter.com/I0apWytlYM

Hank Bachmeier getting class in during a rain delay 💀

50 counterfeit Cartier bracelets were recently seized by Cincinnati CBP. The bracelets, from China & Hong Kong, were worth, if genuine, $5.2M. These shippers tried to smuggle the bracelets intermingled with other jewelry, a common tactic criminals use.https://t.co/RQRA4wSOjw pic.twitter.com/0HYFedz8yI

It's not just boats that can get in trouble on the #GreatLakes. This excavator slid into #LakeMichigan yesterday while trying to salvage a barge north of Holland, Mich. @USCG responders determined today there's no pollution and are monitoring salvage plans. pic.twitter.com/JT2HDvyXkf