Pew Research Center released a study focusing on the news Americans consumed in 2020, a year when the source of a story had never been more influential.

Quickly, the political affiliation of each cable news channel’s viewers stood out. The study found that more Democrats consistently viewed Fox News (11%) for election coverage than Republicans consumed MSNBC (3%) or CNN (9%). Though FNC had only 11% of Democratic viewers, these numbers tell a far different story than the one media writers have spread. Shocker, I know.

The New York Times, The Washington Post, and CNN’s media squad — the dynamic duo of Oliver Darcy and Brian Stelter — have spent years telling viewers that CNN and MSNBC are not liberal equivalents to Fox News, claiming they are either middle of the road or Left of center. That, of course, is a lie, but it sounds good on Twitter.

FNC does not have a large number of Democratic viewers, but the number is nearly four times the number of Republicans that MSNBC has. I wrote before that, on average, combining all hosts, MSNBC hated Donald Trump more than Fox News praised him. Don’t believe me? Ask some Fox News viewers why they are mad at the network.

MSNBC has a virtual absence of right-leaning viewers (3%), and it couldn’t be happier about it. MSNBC executives have made its channel so extreme, aggressive, and mean-spirited — it is nearly impossible for anyone who isn’t all-in even to have the channel on in the background. (MSNBC’s base viewership remains strong).

If you’re still confused, check out Joy Reid’s Wednesday night. The primetime host, who was front and center for MSNBC on election night, randomly tweeted that conservatives are looking to trade in their tax cuts to use the n-word. Uh, what? Afterward, Reid went on TV and said red states are only opening up so that black people can make white people steaks, otherwise the states are cool with the black people dying.

Regardless of what you think of CNN or Fox News, neither network is pushing that.

Viewers of the data are, perhaps, most surprised that CNN has such disproportionate viewing, as it sells itself as the most moderate of the three. Something to keep in mind: the opinion hosts matter less in this study. Just comparing FNC and CNN, conservatives watch Sean Hannity at 9 p.m., liberals watch Chris Cuomo. The split is based on the news or “news” anchors. While Anderson Cooper and Jake Tapper took a clear stance against Donald Trump, Bret Baier never did. Though Baier is often surrounded by conservatives on-air, he’s like ABC’s David Muir, who operates in a liberal atmosphere but keeps his views out of it. Baier hosting major coverages, such as election night, could have played a key role in FNC getting over 10% of Democrats.

Finally, conservative viewers tend to be more loyal to brands as they have fewer options. Pew also found that only 26% of Republicans turned into network TV news, compared to 43% of Democrats. 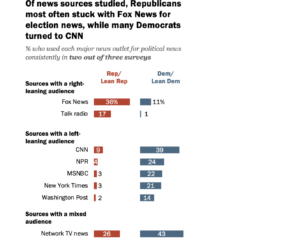 My favorite part of the study showed just how much The New York Times and The Washington Post have told readers that while they might know the truth, they won’t report the truth. Essentially half of the country has stopped reading the two outlets still foolishly deemed papers “of record.” Less than 3% of Republicans are consuming them. That’s what happens when you strategically bury allegations against the Left and put those against the Right on the front page for a week straight.

Overall, this data isn’t positive. Our country’s divide is almost beyond repair, and the news industry is one of the top reasons why. There’s no doubt the data proves that half of the country is consuming a completely different story than the other half. It’s hard to see a noticeable swing moving forward. I’d expect CNN, MSNBC, and Fox News to hang around these same splits during the Biden era.