I frequently have conversations with sources about what is happening in the media, though the what itself doesn’t interest me. It’s the why that gets me to think, explain, and explore. For four years, the answer to the why was almost always the same: Former President Donald Trump. Every decision, pivot, move, rise, and fall in the media had been a direct reaction to Trump. Overall, Trump was a gold mine for the media industry. Now, he’s gone and the cable news industry has to turn the chapter.

A popular take right now is to declare death on cable news and predict it will dwindle to irrelevance in the post-Trump era. I don’t believe that. I do expect the ratings to fall, but the three main networks — Fox News, MSNBC, and CNN — will not collapse. Each network simply faces obstacles that it must overcome in the next 12-24 months.

Recent viewership trends likely tell a small part of the post-Trump news chapter book. Some networks are turning the page, some are skipping ahead, and some are busy re-reading past notable chapters.

Fox News should be in the best position to turn the page and move onto President Joe Biden. Since Election Night, November 3, Fox News has had to cover a non-stop cycle of no-win storylines. I don’t doubt that viewers were angry with Chris Wallace’s debate moderation and the network calling Arizona for Biden early — which ended up being accurate — but the storylines have really hurt Fox.

Fox News is an alternative to Left-leaning news organizations, so naturally, its viewers lost interest in the discussion once Biden won. (Hint: if the Bucs win the Super Bowl on Sunday, Tampa Bay fans will flock to the postgame. If they lose, it will be mostly Chiefs fans.) What’s more, Trump’s loss created a divide among conservative viewers. A third wanted a break from cable news, a third watched as normal, and the other third went all-in on voter fraud allegations. Despite what some say, alleged voter fraud claims did not play into Fox News’ wheelhouse. While some hosts discussed the allegations more than others, the topic put the network as a whole in an awkward position, unlike MSNBC and CNN, which greatly benefited from calling the claims baseless. The MSNBC and CNN audiences loved the unambiguous denial of Trump’s claims, and both networks then had another excuse to kick Trump on his way out. And Newsmax pivoted strongly to voting irregularities, elevating the network from 78 in cable to 29 in November.

As a network, Fox News’ stance on Trump’s claims was less definitive than its competitors.

All of these factors did result in a decline in Fox News’ numbers. In January, the top five viewed cable news shows were as follows:

That looks far different than yearly averages from 2020:

Once the pages are fully turned by spring, the order (not the viewership) of the shows will likely resemble the average of 2020, not Jan. 2021. Fox News has ranked No. 1 in cable news for 19 years in a row, I predict the network will end up ahead of CNN and MSNBC at the end of 2021.

CNN is coming off a monumental January, leading both MSNBC and Fox News in total day and primetime viewership. Year-over-year, CNN was up 153% and 128% in the respective categories. That’s all positive, but of the three networks, CNN could find itself in an identity crisis with Biden in office. Over the past four years, CNN leaned into Trump as much as any channel, erasing the separation between its opinion and news programs. For CNN, two observations were affirmed during Trump’s reign: Trump moved the needle for CNN, and CNN is the go-to network for non-news viewers during breaking news periods.

I explained the latter in December:

“During the highest days of news interest, non-cable news viewers choose CNN. There are millions of Americans who tune in on Election Night, the few days and weeks after, and don’t come back for four years. For the most part, such viewers choose CNN.

“There are a few reasons for the turnout. CNN has maintained its brand name, despite its viewership loss. It benefits from a default factor. The average Americans who don’t follow cable news think that Fox News is for the right, MSNBC is for the left. They believe CNN is the “news” network, even though we know this is not the case. CNN also maintains a high Q-rating by airing in all major airports and is more likely to appear in restaurants and bars than Fox and MSNBC.”

This was proven again last week when CNN’s primetime viewership fell 44% during Joe Biden’s first full week in office. Now that network president Jeff Zucker has announced he will depart at the end of 2021, CNN must search for a new identity. 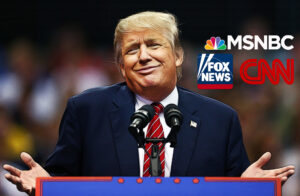 Though it should see some decline post-Trump, MSNBC will be fine overall. The network will bash Trump long after he’s gone by blaming him for the problems Biden can’t fix; effectively prop up Biden, Kamala Harris, and Alexandria Ocasio-Cortez; and label everyone on the Right as racist. All those tactics will draw viewers. MSNBC has also stabilized its overall lineup by expanding Nicolle Wallace’s Deadline. The two-hour daily show is moving the needle and gives the network stability between the Morning Joe and its primetime lineup.

All three networks will need to explore their talent benches. Sean Hannity, Rachel Maddow, Tucker Carlson, Chris Cuomo, and Jake Tapper are the biggest names in cable news. That won’t change. However, lesser-established personalities that were tied to Trump aren’t guaranteed to sustain their appeal when the conversation moves. As the industry turns a chapter, expect the next dominating story to elevate new talents, while others holding onto Trump lose the appeal they gained over the past four years.

While I’d say I expect cable news to normalize in its usually pecking order of influence, the digital aspect remains the biggest unknown, a concern raised before the 2020 election. All three networks have to improve their podcast networks and soon. Post-Trump, news listeners and viewers will be more inclined to cherry-pick topics they want to consume, which could send some viewers to the digital space. ESPN let Barstool and The Ringer become more influential in the sports podcast medium than they were, and cable news networks cannot make the same mistake. Right now, Fox News, CNN, and MSNBC are falling behind in news podcasting, which will only eat away more at linear TV habits in the coming years.

Fox News should be particularly focused on this area. Podcasts hosted by conservative personalities are growing rapidly, led by Ben Shapiro, Dan Bongino, Steven Crowder, and Charlie Kirk. (Prediction: Megyn Kelly is next to join this list.) The Daily Wire has just five podcasts, yet ranks 11th on Podctrac’s list of downloads. Fox News doesn’t need to make hires to close this gap. It already has the personalities that could make a dent in podcasting. All Fox needs to do is choose the right hosts, find the right format, and promote the shows in a way that will convince viewers to subscribe. I explained last week that simply launching a podcast and waiting for listeners to find it is not the path to success. Liberal shows such as Pod Save America, NPR’s library, and The Daily are habit-listens that will succeed with or without Trump, and CNN and MSNBC have no answer to them right now.

Donald Trump was the answer to every media question for four years. Now that a new president is in office, the networks have to provide their own answers, their own directions.