The PGA Tour is being called out by former President Donald Trump.

As the LIV Golf Invitational Series continues to pry notable names like Brooks Koepka, Phil Mickelson, Dustin Johnson, Bryson DeChambeau and others away from the PGA Tour in exchange for large sums of guaranteed money, Trump is calling on the PGA Tour to step up.

“So INTERESTING to see the PGA Tour finally start to treat its players fairly now that the LIV Tour has opened to such a big BANG,” Trump said via his social media app, Truth Social.

The 45th President of the United States was referencing the PGA Tour’s announcement from last week that stated they will increase purses and no-cut events beginning in the fall of 2023. They’re doing so in direct response to the competition presented from LIV.

As Trump sees it, the PGA’s move is long overdue, especially since the Tour’s executives have been fattening their pockets for years. “They have finally increased purses to players, substantially, and I am sure will soon be reducing their massive executive salaries in order to make things work,” said Trump. 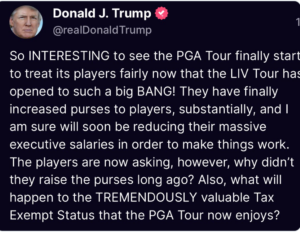 LIV Golf is paying its players hundreds of millions of dollars – obviously huge money, especially for a startup. Trump wonders why it’s taken so long for the PGA Tour – around since 1929- to significantly increase players’ winnings.

Per Trump: “The players are now asking, however, why didn’t they raise the purses long ago? Also, what will happen to the TREMENDOUSLY valuable Tax Exempt Status that the PGA Tour now enjoys?”

While Tour golfers wait more than a year for an increase in earnings, the LIV Golf Series Invitational will continue to add to its players’ bank accounts in the present. The second outing of their nine-tournament season is slated for Portland, Oregon’s Pumpkin Ridge Golf Club this week.