Folks, we have to agree on something here — don’t jump into the raging waters at La Zorra cove in Torrevieja, Spain for content purposes. I know you’re desperate for content that other people don’t have, but it’s not worth your life or the life of another fitness coach to get those likes and comments.

Let’s go to La Zorra cove where two fitness coaches died after the woman, Emma Mönkkönen, 24, jumped off a cliff into raging surf in what’s being described as a daredevil incident. The woman struggles against the surf and is in desperate need of help when Russian fitness coach Daniil Gagarin, 30, jumps in to save the woman.

That’s when things turn really bad and tragic. Gagarin is able to get the woman to the safety of a massive rock, but the incoming waves soon overpower the fitness coaches and they’re swept out into the Mediterranean Sea.

And all of this goes down as Gagarin’s wife is recording.

According to media reports, the Finnish woman was recovered nearly two miles from the cove while the man’s body was found the next day. The Sun reports the two fitness coaches worked together at a Spanish resort.

Let’s stop and think about this whole adrenaline thing for a minute. I get the guys who jump off bridges and then throw out the parachute thing. I wouldn’t make the jump, but I see that they have a plan to safely float down to the river at the bottom.

In this case, I don’t see Emma’s escape plan. Did she study how the waves blast into the rocks and then think she was all good? Did she throw a throw a pool noodle off the cliff to get a feeling for how her body was going to be thrown around?

This clearly isn’t like the cliff jumping you’d see on ESPN from Spain back in the day where Juan Carlos would be doing quads off the cliff into perfectly calm water. This is absolutely bizarre behavior in the name of content, which it clearly was since Daniil’s wife was recording Emma’s jump. 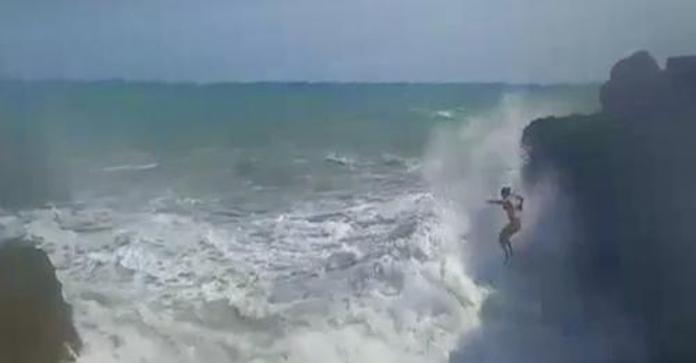 Go ahead, send this to your kids. Make sure they understand the difference between 1980s ESPN cliff jumping and 2021 Doin’ it for the ‘gram! cliff jumping. The clear difference here from the clout chasers in the past who’ve fallen off cliffs trying to get content is that Emma JUMPED into the raging waters on purpose.

As for Daniil, it’s unclear if he had a plan to do the jump or if this was just an Emma thing. In the end it didn’t matter as he wasn’t able to get on that rock before the incredible waves poured into La Zorra cove.

Can we all agree to take a break here. Let’s look at food photos on Instagram. No more putting it all on the line so guys like Daniil have to do rescue missions.