Former Tennessee vaccination director Dr. Michelle Fiscus, who went on CNN to tell Anderson Cooper that a dog muzzle was sent to her by politically motivated opponents, has been outed as a fraud, according to a report from Axios. The news outlet reported Monday that the Tennessee Department of Safety and Homeland Safety determined that the muzzle was purchased from a credit card in Fiscus’ name.

The drama surrounding Fiscus began when her husband, Brad Fiscus, determined that the muzzle sent to his wife was a sign that “someone wanted to send a message to tell her to stop talking” about the vaccine. The couple determined that her firing was politically motivated by angry Republicans who were fired up because she’d sent out a memo citing a Tennessee law about minors receiving medical care without parental permission.

It turns out that wasn’t the case. And the muzzle wasn’t some sign from angry anti-vaxx Republicans.

Tennessee Chief Medical Officer Dr. Tim Jones wrote in a July 9 letter that Dr. Michelle Fiscus should be fired because of her “failure to maintain good working relationships with members of her team, her lack of effective leadership, her lack of appropriate management, and unwillingness to consult with superiors and other internal stakeholders on (Vaccine Preventable Diseases and Immunization Program) projects.”

Meanwhile, Fiscus had this dog muzzle thing up her sleeve and went on CNN to make it seem like the anti-vaccine crowd had come after her to send a message. 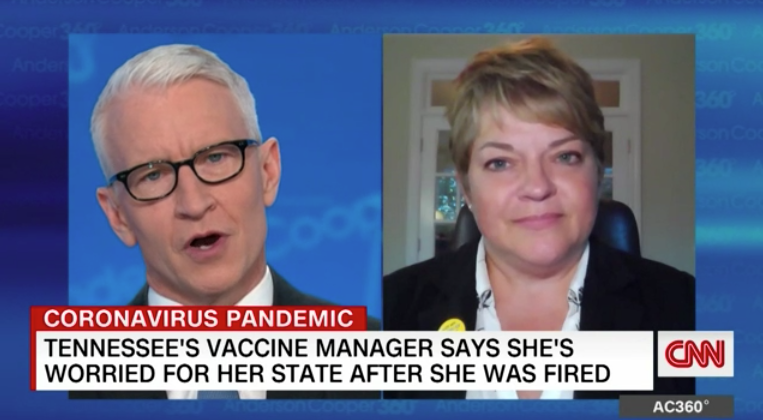 “At first, I thought that was a joke and contacted a few friends, and then, when no one claimed it, I realized that that was something that was sent to me as some kind of a message,” Dr. Fiscus told Cooper.

“They obviously didn’t know me because they sent me a size three which is for beagles and I’m obviously a pit bull, which requires a size six.”

When approached by Axios with the state’s findings that a credit card in his wife’s name was used to purchase the item, Brad said he was “surprised” by what had been found during the investigation.

CNN wasn’t the only outlet that fell for the Fiscus’ hoax. ABC-2 in Nashville sat down with Tennessee State Representative (D.) John Ray Clemmons who told the station that he didn’t believe his political colleagues sent the muzzle, but added, “their words and their actions resulted in that.”

Well, there’s some big news for Clemmons today. It was actually someone with a Fiscus credit card who sent the muzzle to Michelle’s house. Imagine that.