Here’s something the media is not covering. Analysis from the U.S. government found that fentanyl overdoses are the leading cause of death for adults ages 18-45.

Fentanyl overdoses are rising drastically by the year. As per Families Against Fentanyl: 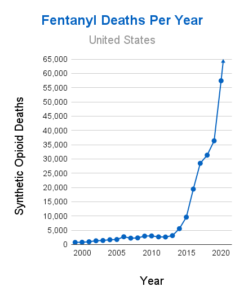 Fentanyl is a synthetic opioid that’s deadly even in small amounts. It is reportedly 50 to 100 times more potent than morphine.

Almost 80,000 people who are not even 46 years old have died from one cause in the past two years. That’s a crisis. So why aren’t more outlets saying this?

Because, unlike COVID, covering fentanyl isn’t advantageous. There’s no political gain in warning Americans that fentanyl is a more significant threat to young Americans than the omicron — say it in a spooky voice — variant. And that’s awful and discouraging.

The CDC even buried the ominous fentanyl death rate in a PDF to focus more on COVID. Take a look:

Buried in the CDC data:
🚨Fentanyl poisoning is now the #1 Cause of Death Among Americans 18-45🚨

Comparatively, 53,000 people in the age group have died from COVID between Jan. 1, 2020, and Dec. 15, 2021. Fentanyl overdoses are also more deadly than suicide and car accidents for young adults.

Fentanyl overdoses should not be a political topic. It should simply be a topic — a warning of sorts, which it’s not currently. Fentanyl is rapidly killing young Americans yet hardly makes the news

So if you know of anyone at risk of using fentanyl, reach out to help them immediately.