The decline measures ratings on both terrestrial radio and SiriusXM among men ages 25-54, the target sports radio demographic.

There are several key points to make from the fall book. Overall, sports-talk radio is down due to the COVID-19 pandemic, which drastically cut the number of Americans commuting to work on a daily basis. In a normal year, the decline would not be nearly so high. However, I still believe the lineup would be down regardless, and likely by double digits.

Industry experts initially called the new lineup weak, and they have not wavered from that initial assessment. OutKick then reported throughout the spring and summer that ESPN had ambitious plans to revamp ESPN Radio — but these efforts failed.

Last January, ESPN detailed its 8% rise in the 2019 fall book, showing the Will Cain Show as the primary reason. ESPN said Cain’s radio show increased 18% year-over-year, saw triple-digit percentage audience growth on terrestrial radio for the quarter, and a 20% audience increase across platforms for December 2019. However, Cain left the network for Fox News over the summer, leaving a significant gap in the lineup. Stephen A. Smith’s show was also up, but just 2%, and he was already set to leave radio by the end of the 2019 fall book. That’s two shows ESPN has not been able to successfully replace.

ESPN Radio likely won’t get back to those 2019 numbers, but it should soon see an uptick from 10 a.m. to 12 p.m. Dan Le Batard’s departure hurts ESPN’s digital property but it’s a win for terrestrial radio, where The Dan Le Batard Show struggled. Mike Greenberg, after his fall stint in the 12-2 time slot, moved up to 10-12 this month. Greenberg works on national radio and now appears during the morning drive on the West Coast.

Max Kellerman’s show has an upside as well. Kellerman has a marquee name and a strong following in Los Angeles. He has also succeeded at each stop at ESPN. However, his strong focus on Los Angeles and New York hurts the interest in his show in smaller markets. Kellerman’s show focuses on the NBA, while football talk attracts the widest radio audience. 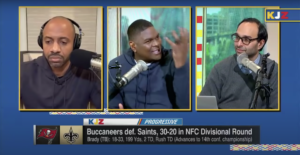 Questions still remain about the rest of the new lineup. Keyshawn, JWill & Zubin (6-10 a.m.) was ESPN’s main focus, but it is not working. I’d be surprised if the show ever takes off. ESPN was foolish to move on from Mike Golic Sr. I said at the time that letting him go was a mistake, and I’ve been proven correct. A network that already lacks likable personalities chose to lose one of the few who still remained.

It’s too early to judge Bart and Hahn, the 12-2 show. The duo worked in New York and will get a run on the national stage. If nothing else, there’s potential there.

I cautioned from the start that Chiney & Golic Jr. (4-7 p.m.) is in a tough spot. It’s tasked with filling two hours of the Will Cain Show, but it doesn’t have the ability to replace that show’s reach, interest, or unique approach. Afternoon radio isn’t hard to figure out. Fun works, non-sports topics don’t (see Bomani Jones’ ratings). Chiney & Golic Jr. is fun but dives into non-sports topics too often and books guests few sports fans want to hear. Chiney Ogwumike’s growth, however, is a positive. Transitioning from TV to radio has produced a mixed bag of results. I was unsure how Ogwumike would do early on, but she has gotten better each month.

ESPN decision-makers won’t panic yet. They can cite COVID as the reason for the ratings decline. They can also point out the 31% rise from the spring. However, that comparison is fool’s gold. There were zero sports to talk about last spring.

While ESPN has been quick to pull the trigger on radio, I’m guessing that this lineup gets another full run next fall.