The competition certainly appreciated it: Here’s how the other shows in primetime fared:

Hell, even The Real Housewives of Beverly Hills dunked on WokeCenter with a 461,000 average.

ESPN airs various versions of WokeCenter throughout the day now. Those, too, are tanking. Just a few weeks ago, it gave ESPN’s an all-time 41 year low.

A special woke version of the ESPYs aired this past weekend. That was also an unmitigated disaster. Only 482,000 viewers tuned in to watch the award show that was barely an award show. That’s down 81% from 2014, the last year it aired on ESPN, not ABC.

It was hard to imagine ESPN could follow up that type of disaster. But, to its credit, last night did it.

This special didn’t just pop up, either. It was heavily promoted with #StayUndefeated.

Here are some of the highlights:

We need to change our relationship to the word “privilege” and understand that it’s not an attack on someone’s character to call it out. (via @goodtrouble) pic.twitter.com/opo9DXlfje

"When you have been the beneficiary of a system of inequality. When you have actually reaped billions of dollars over the years in wealth and assets and land. You're not going to want to confront that."@timjacobwise discusses why it's hard for white people to talk about racism. pic.twitter.com/Z50K6NLEb8

“Go talk to your white friends and your white families and your white co-workers …”@clintonyates shares a strong message during @TheUndefeated's “Time For Change: We Won’t Be Defeated” tonight at 8 PM ET on ESPN. #StayUndefeated pic.twitter.com/Kx3e0PYATn

It also begs the question: How many of the 100,000 just had it on in the background? 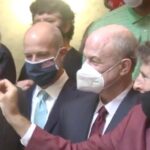