On Wednesday ESPN’s studio programming, which has become MSESPN’s WokeCenter on steroids 24/7, hit a 41 year ratings low. That is, in the entire history of the network existing, it has never had lower overall studio ratings than it did this week.

The network, which has become more left wing than MSNBC and CNN combined over the past several weeks, has completely abandoned sports coverage. The result? Viewers, many of whom were willing to watch the channel even during a pandemic disaster with limited sports to consume, have abandoned it in droves. How bad was it? We’re talking full on crisis mode level awfulness.

“First Take” was the highest rated ESPN studio show all day, posting just 211,000 viewers. That was the 93rd highest rated program on all of cable. Putting those numbers into context compared to other shows airing the same day on cable: “Nick Cannon Wild and Out 15” on VH1 had 50% more viewers than ESPN’s top show. “Smuggler: Secret Stash” on National Geographic doubled First Take. Not to be outdone, “Craig of the Creek” on the Cartoon Network posted 200,000 more viewers.

So did something called “Ant Anstead Master Mechanic” on a channel called Motor Trend, which I didn’t even know was a cable channel, much less a show.

Get Up had just 136,000 viewers on June 10th, the lowest number of viewers I could find in the show’s history. (And there have been a ton of bad ratings for that show.)

First Take had just 211,000 viewers, the lowest number of viewers I’ve ever seen for the show.

NBA: The Jump had only 112,000 viewers and that’s when the NBA finally had news about returning to play.

And these were just the shows that rated, it was likely worse for other studio shows which didn’t even make the top 150 cable shows.

How do we know this?

Because all of ESPN’s studio programming has hit all time lows over the past two weeks.

Around the Horn had just 175,000 viewers, again, the lowest I have ever seen.

Jalen and Jacoby, airing in the middle of the day, had only 122k viewers last Wednesday on ESPN. I’ve never seen ESPN flirt with having fewer than 100,000 live viewers for a program in the middle of the day and they are doing it regularly now. (Heck, they may have done it already since we don’t get all the day part ratings at the above linked site).

Yes, it’s no surprise that ratings have been down across the board for sports programming without sports. But not like this. Not even close. Heck, on Wednesday FS1’s Race Hub was the highest rated sports studio show by a massive amount, posting 324,000 viewers. Race Hub has never crushed ESPN programming like this before.

Skip Bayless’s “Undisputed” show airing on FS1 came closer to “First Take,” with 131,000 viewers compared to First Take’s 211,000 viewers, than it has since Bayless went to FS1 several years ago.

Yes, sports is down, but ESPN is tanking at a level unseen in the history of the network. And unseen compared to other sports networks.

Why does all this matter?

Because it’s an ominous sign for sports ratings to be tanking as sports prepare to return to play. There are many serious things going on in our country right now and the vast majority of sports fans know where to find news about serious things going on in the world. That’s why cable news ratings have skyrocketed. But sports fans don’t want their sports commentators to be weighing in on non-sports news on sports networks.

Yet here we are, right back where we were several years ago when Caitlyn Jenner was getting an ESPY on ESPN.

Especially in an election year when sports fans are craving something other than politics all the time.

But here we go again: ESPN’s has leaned right into WokeCenter, this time on steroids, and the business has collapsed unlike anything we’ve ever seen in the history of the network.

Wednesday was a 41 year ratings low.

How much worse can it get? That just depends on how much more WokeCenter we get and whether anyone at ESPN can regain the station controls.

Because right now ESPN is dead. 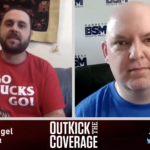