It had been a few weeks since noise emanated from an ESPN employee’s Twitter account. And, somehow, this latest screech for racism is the laziest attempt yet.

During ESPN’s Monday Night Countdown, ESPN writer Howard Bryant sub-tweeted his network’s programming by — you guessed it — counting the races and genders of each subject, a now common practice among media members. 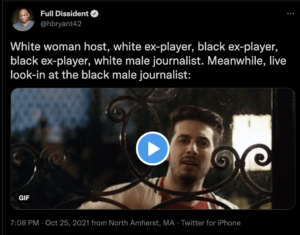 Notice how Bryant cherry-picked a single program in an effort to claim ESPN holds a black group back. He didn’t pick ESPN’s NBA Countdown, which features — wait for it — two “black male journalists” who are now pregame commentators in Stephen A. Smith and Michael Wilbon. The duo co-hosts alongside Mike Greenberg, a white man, and Jalen Rose, a black ex-player.

Remember, Bryant considers Schefter a “journalist.” Schefter used his writing background to elevate into a pregame commentator. Thus qualifying Smith and Wilbon as journalists as well.

You can do this for any show. Pick one: some group is left behind.

So by using Bryant’s logic, either every ESPN program is flawed because not a single show can represent every group, or ESPN must use a black male who didn’t play professional sports on each program. I assume Bryant prefers the latter.

Far-left blue-checks like Bryant continuously move the goal post. At first, they claimed ESPN didn’t have enough black people on-air. That’s obviously no longer true. This summer, the New York Times and disgruntled former ESPN employees claimed ESPN holds black women down below. Upon further review, ESPN has black women in high-profile on-air roles across the network. Therefore, after a few months of pondering, Howard Bryant now set his sights on black males, one of ESPN’s most highly paid groups.

The case is baffling at a time ESPN pays Stephen A. Smith $12 million a year, and awarding him near-executive power. Smith recently used his wand to remove Max Kellerman from First Take, and get on NBA Countdown with the exact cast of his choosing.

As for the current journalists without their own TV vehicles, three of the most promoted, who don’t ride the waves of original reporting, are black men: Bomani Jones, Clinton Yates, and Howard Bryant himself. ESPN even continues to promote Bryant after police arrested him for assaulting his wife. Bryant called his arrest racist too.

So how exactly are black men who didn’t play oppressed at ESPN? No one has explained how. They only tweet it.

In the end, blue-checks are not looking for diversity and inclusion. Instead, they are demanding exclusion. Whether internally or externally, critics blast ESPN for any show that features not only black talents. ESPN’s all-black shows — the new Wednesday Countdown, NBA Today, and on most days First Take — are among the most critically acclaimed.

ESPN detractors, or in this case current employees, who influence executives sense a power. ESPN is caving to their demands. Thus, they are openly racist, and everyone else must accept that, or hope they are the right race-gender combination. I guess it’s black males today.