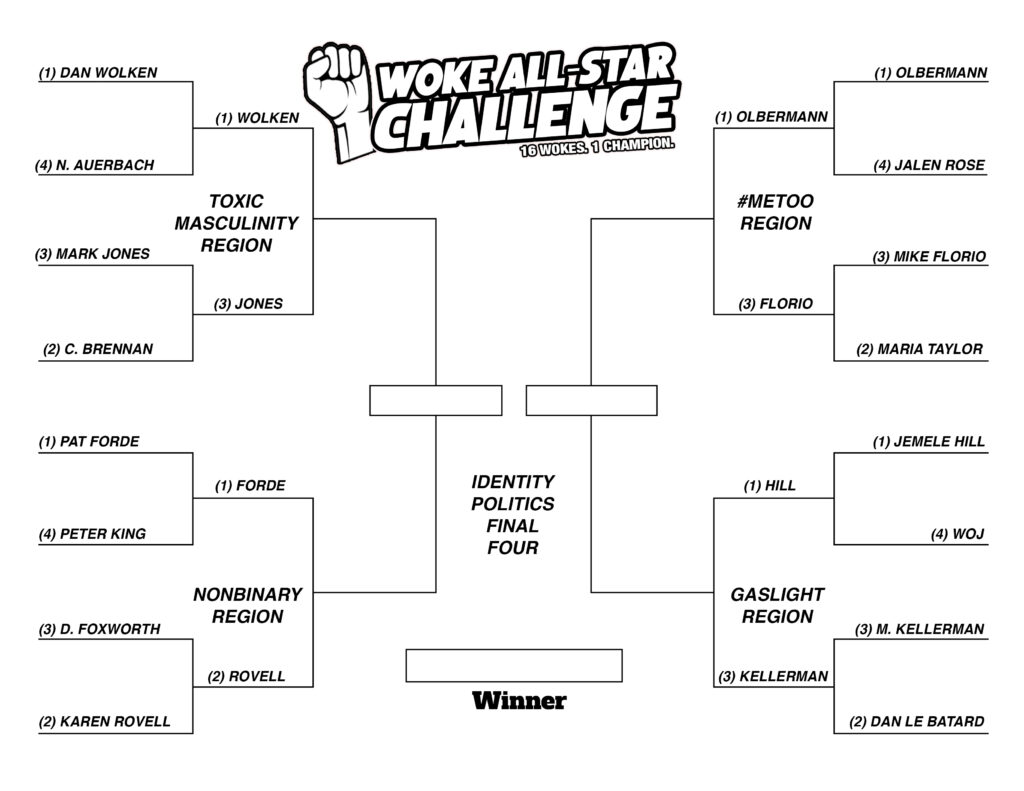 Update: (3-28) Voting is now live for the Nonbinary Regional Final between Pat Forde and Darren Rovell. The committee heard your concerns on voting and we have added a second form of voting for those of you who won’t use Twitter. Votes will be combined and winner/loser will be announced.

The Elite 8 of the @outkick woke sports media bracket has arrived. Today’s contest: Dan Woken vs Mark Jones. Who ya got to advance to the Identity Politics Final Four? https://t.co/YMFKRpykxD

Nicole Auerbach, who has been on quite a woke bender over the last year or so, stood no chance in the Toxic Masculinity semis against the bad boy of woke, Dan Wolken. It wasn’t a fair fight with Wolken garnering a whopping 89% of the votes against a worthy opponent. Many people know Auerbach’s woke work, but they probably don’t know the name yet, which hurt her. It was an impossible draw against a guy so hated by most of humanity. 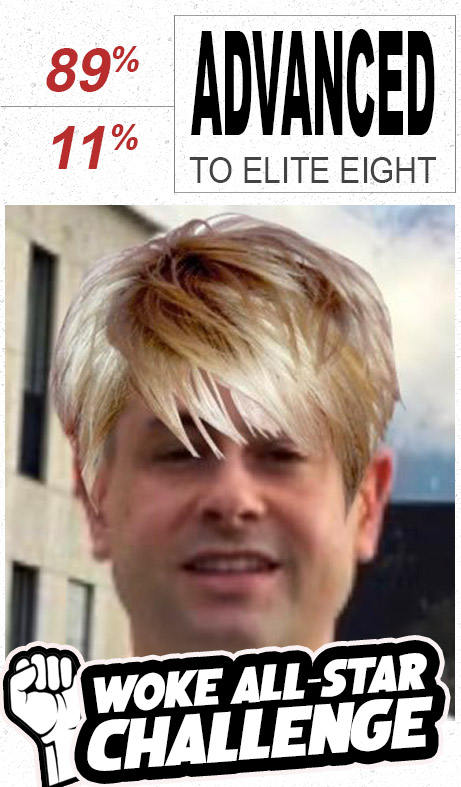 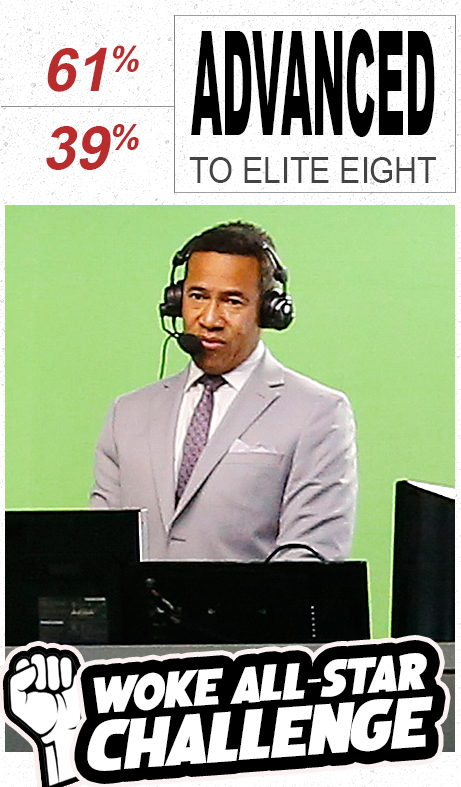 Meanwhile, cop-hater, talent-lacking, far-Left moron Mark Jones took care of business in his showdown against man-hater Christine Brennan, whose notorious meltdowns over anything masculine just weren’t enough to overcome the guy who claims he doesn’t want police to protect him because they might blow his brains out.

Most observers believe Wolken wins this one with ease, but don’t forget just how much Jones hates the police, Nick Bosa, and the national anthem. #NeverForget.

Handicapping via: @BeatinTheBookie – “While Jones is still relatively unknown, Wolken is to wokeness as Duke is to college basketball, a powerhouse, he should easily move on to the next round.” 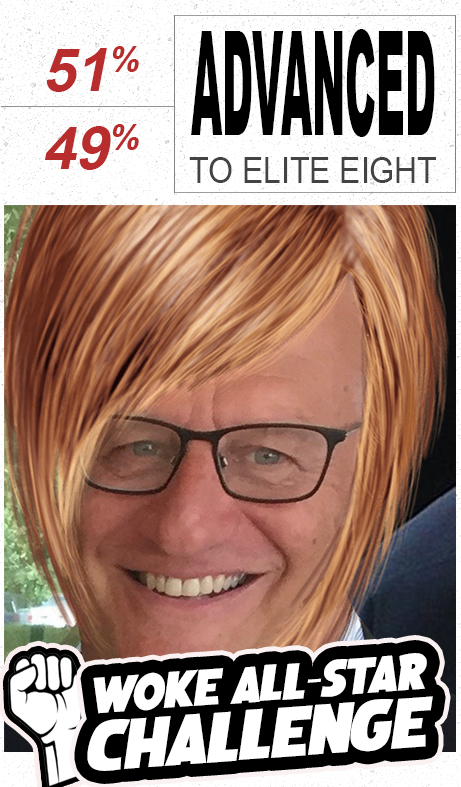 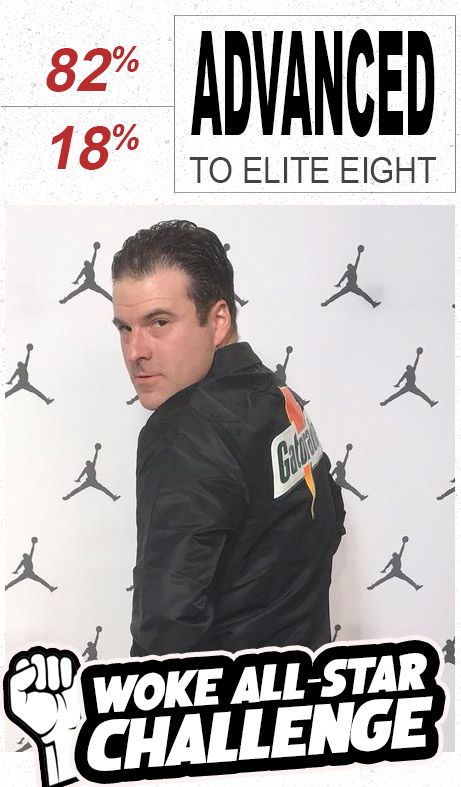 Rovell rolls into the Elite 8 with a pure hatred that will make this a complete dogfight with Forde whose smug, woke smile wants a piece of basement boy.

Handicapping via: @BeatinTheBookie – “Rovell is younger and his enthusiasm shows as he uses his Karen powers multiple times daily, where Forde only comes out in big moments, Rovell’s stamina gives him the edge.”

After an entire year of calling for people he doesn’t like to be arrested, the delusional Keith Olbermann crushed Jalen Rose worse than Rose got crushed on the NBA court, topping the NBA talker 92% to 8%. To be fair, sitting next to Maria Taylor might have lowered Rose’s ability to break out the textbook traits of wokeness. Anyway, as always, Keith Olbermann is the worst. 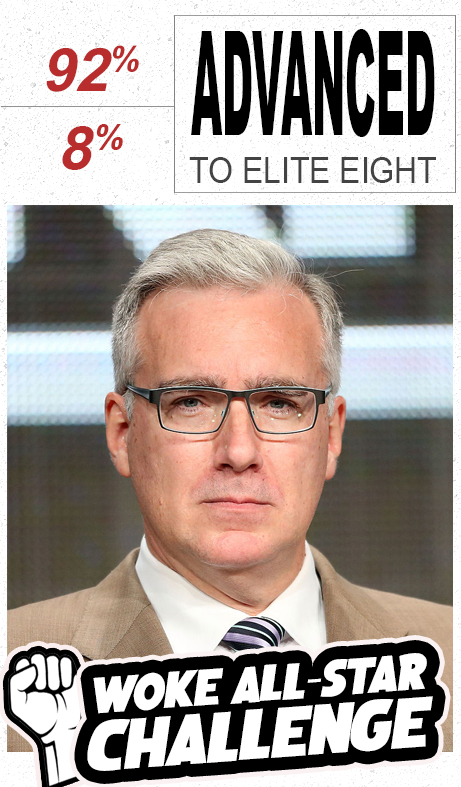 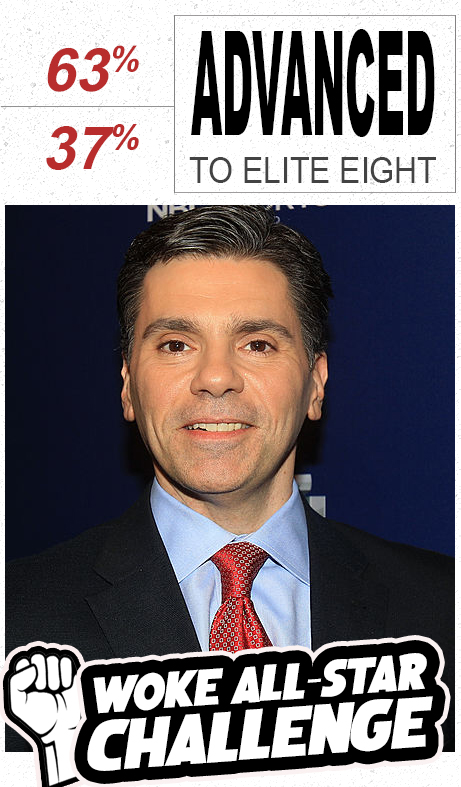 Mike Florio’s quest to one day backup his NBC colleague Rachel Maddow on MSNBC continues. To hold an always-mad-online, I-deserve-every-job, why-are-you-picking-on-me SJW like Maria Taylor to just 37% is impressive. But the voters have spoken: Florio’s PR work for former backup QB Colin Kaepernick outweighs Maria Taylor, who believes she is immune from all criticism.

It doesn’t get further Left and angry than Olbermann and Florio. This one should be good.

Handicapping via: @BeatinTheBookie – “Olbermann is the power name in this matchup against the lesser-known, yet ultra-sensitive Florio, and while Florio has some crazy takes, Olbermann is the one who consistently shows to up Twitter with takes that make Alex Jones seem like Albert Einstein.”

No surprise, Adrian “F-you” Wojnarowski got beat down and slaughtered by the hateful Jemele Hill. Hill’s resume speaks for itself, and her lack of coverage of Deshaun Watson’s sexual assault allegations speaks even louder. No offense to Shams, but Woj did win the award for the wokest insider of them all. 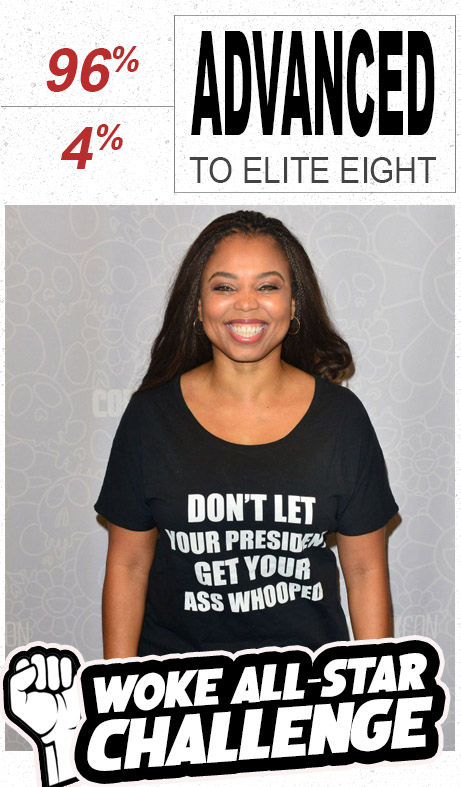 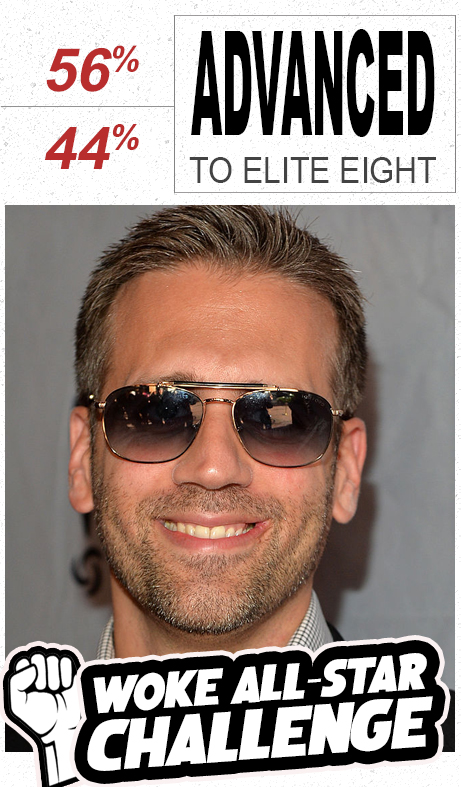 This was a tough one. Experts predicted the thin-skinned, terrestrial radio disaster known as Dan Le Batard would put up a better fight against limousine liberal Max Kellerman. Perhaps falsely claiming the NFL couldn’t handle a season without a bubble, blaming “right-wing agitators” for BLM riots, and calling the SEC dumb won it for Kellerman.

As for the next round, again, this is Jemele Hill.

Handicapping via: @BeatinTheBookie – “Not much of a matchup here as the powerful loudmouth Jemele Hill should shut former rapper Max Kellerman up faster than Stephen A Smith does every morning, and unlike the boxers he covers, Max doesn’t hit back, he takes his beatings like the snowflake he is.”

*This post is co-authored by Joe Kinsey and Bobby Burack.