There was a period during the Super Bowl run in 2018 when Eagles fans stopped fighting during games because the team was rolling and fans didn’t want to risk missing any of the fun. Things slowed down in 2019, and Eagles fans tried to act civil for once. If Sunday’s fan fight and the Eagles’ 1-4-1 record are any indication of how the rest of 2020 will go, it’s going to be a blood bath inside that stadium.

Around 5,500 fans were allowed into today’s loss to the Ravens, and this still happens. For those keeping track at home, Browns fans were the first to break a stadium health promise and fight in the stands.

Eagles fans are back pic.twitter.com/kkbURTCjDh

“We’re thrilled to have them back,” Eagles president Don Smolenski told NJ Advance Media on Friday. “You always appreciate and value our fans — our fan base is incredible. The energy they bring — starting at 6 a.m. on Sundays in the parking lots — that just carries into the game and all throughout the game. You feel that energy and the players feed off that energy, and it just invigorates the whole city.”

You can say that again, Don! The NFL is so much better when Eagles fans are back in the stands and creating content.

Philly's finest with first half analysis 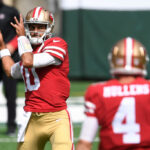 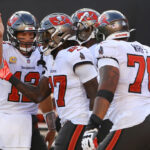