Nick Cannon, the longtime host for MTV and VH1, was fired by ViacomCBS over racial and anti-semitic comments that he made on a recent podcast with former Public Enemy rapper Professor Griff. Today, Dwyane Wade tweeted support for Cannon that does not have a lot of context and does not look good at the moment: 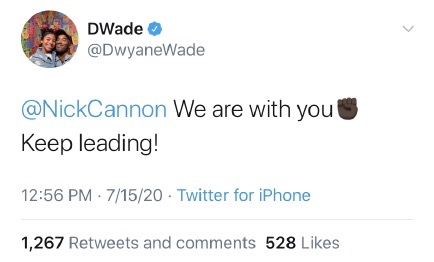 Wade has since deleted the tweet amidst a flurry of backlash.

If this is the first you’re hearing about this story, it is pretty convoluted. In this segment, for example, he invoked Louis Farrakhan (who as the Anti Defamation League has chronicled is a long-time anti-semite), brought up the Rothschilds (a banking family frequently brought up in Jewish conspiracies), and said that because he is semitic he can’t be anti-semitic:

to everyone saying that nick cannon didn’t say anything racist or antisemitic. i get that white people are sensitive but also.. this is so problematic. if he thinks he’s a true semite, fine, but that doesn’t give him the right to spew conspiracies about jews controlling the banks pic.twitter.com/h9ahC24g93

CBS News also covered some of the other things that Cannon said on the podcast:

In Cannon’s hour-plus podcast, he and Griffith contend that Black people are the true Hebrews and that Jews have usurped their identity. Cannon then segues into a discussion of skin color — “And I’m going to say this carefully,” he begins — to allege that people who lack sufficient melanin are “a little less.” Those without dark skin have a “deficiency” that historically forced them to act out of fear and commit acts of violence to survive, he said. “They had to be savages,” Cannon said, adding that he was referring to “Jewish people, white people, Europeans,” among others.

In a lengthy Facebook post after he was fired by ViacomCBS, Cannon apologized to Jewish people for the pain this caused them. Later, he demanded that ViacomCBS give him the intellectual property for the Wild N Out franchise:

Truth and Reconciliation.I am deeply saddened in a moment so close to reconciliation that the powers that be, misused…

In the part where he was apologizing to Jewish people, Cannon did not specify whether or not he believes that anything he said was wrong. He says he has accepted an invitation to Israel, so my optimistic hope is he will be on a path towards listening that DeSean Jackson has embarked on since sharing posts about Hitler and Farrakhan.

While it’s unclear exactly which element of this saga that Wade was supporting Cannon in and telling him to keep leading on, the appearance is that he is at best indifferent to Jewish sensitivities about stereotypes. Stephen Jackson, Shannon Sharpe, and Malcolm Jenkins, in their reactions to the DeSean Jackson story last week, did similarly. We’ll see if Wade clarifies his support of Cannon later.

I want to clarify my now deleted tweet. I was not supporting or condoning what Nick Cannon specifically said, but I had expressed my support of him owning the content and brand he helped create 🙏🏾

I was too quick to respond without being fully informed about his hurtful anti-Semitic remarks. As you all know I have ZERO tolerance for any hate speech!