Last week, 64 years after The Cat in the Hat‘s debut, the woke declared the legendary Dr. Seuss a racist.

It began when some useless, far-Left educator group known as Learning for Justice demanded that Dr. Seuss be removed from acknowledgment on “Read Across America Day” because of his, get this, “racial undertones.” Those marching orders weren’t just answered by some teachers, but even our president, Joe Biden.

Tuesday, Biden followed presidential tradition in proclaiming March 2, Dr. Seuss’ birthday, as “Read Across America Day.” Yet unlike his predecessors, he refused to mention Dr. Seuss, bowing to demands to forget the children’s author ever existed.

It gets better from here. Six of Dr. Seuss’ books will no longer be published because they got so offensive the country couldn’t take it anymore. According to CNN, And to Think That I Saw It on Mulberry Street, If I Ran the Zoo, McElligot’s Pool, On Beyond Zebra, Scrambled Eggs Super!, and The Cat’s Quizzer are all done — gone, racist.

I mean, look at this cover. How could schools have allowed children to witness this level of hate for so long? 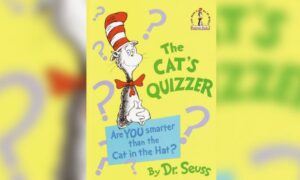 Dr. Seuss Enterprises, which caved like most of corporate America, agreed to cancel If I Ran the Zoo over a claim that a white male character “illustrated dominance” by carrying a gun on a page.

The same study says the book has examples of “Orientalism and white supremacy.”

And though there are many non-white characters in Dr. Seuss’ work — like Horton the blue elephant — Learning for Justice says that’s not good enough:

“It’s also important to note that each of the non-white characters is male and that they are all ‘presented in subservient, exotified, or dehumanized roles,’ especially in relation to white characters,” the organization says.

You might be wondering what makes the many blue and yellow characters white supremacists, but don’t ask that. In fact, don’t even think about it.

“Learning for Justice claims that anyone who defends Dr. Seuss’ problematic work is a racial ‘apologist’ and is making excuses for why ‘bigotry doesn’t matter,’” Chrissy Clark reports.

Well, there you have it. If you question the study, you are a “racial apologist” and a “bigot.”

Last week, I asked whether Dr. Seuss could pull a Mr. Potato Head and survive cancellation orders. He didn’t.

My advice: before you burn the Dr. Seuss books and go buy other books for your children, check with Learning for Justice and Biden to make sure they are allowed.