The doctor is in. In the lead, that is.

According to a new Fox News poll, Dr. Mehmet Oz has now taken a slight lead in the U.S. Senate Republican primary in the commonwealth of Pennsylvania. Oz currently has 22% support, while opponents David McCormick and Kathy Barnette are close on his heels, with 20% and 19% respectively. 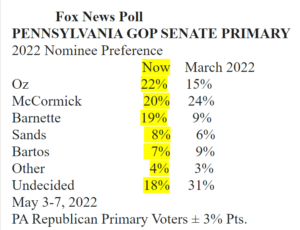 Former president Donald Trump endorsed Oz early last month, and that endorsement seems to be the difference-maker so far. McCormick had a nine point lead back in March, but he now trails Oz by two points. Though McCormick sought Trump’s endorsement, Trump called him a “liberal Wall Street Republican,” according to Breitbart.

Per Fox News, 37% of the voters polled said that the Trump endorsement made them more supportive of Oz, while 22% said it made them less supportive. An additional 37% said it had no effect on them.

Meanwhile, Barnette has had a surge of momentum of her own. Democrat Fox News pollster Chris Anderson says, “Even though Oz got Trump’s endorsement, Barnette has more momentum. Her support doubled in two months, her supporters are the most interested, and her negatives are much lower than Oz or McCormick.”

That kind of voter enthusiasm plays out in the polls as well. Fox News also polled those who consider themselves “extremely interested” in the race, and those voters favor Barnette by a small margin.

All of these poll numbers have changed significantly in the last few months, but the actual votes at the polls will have the final say. Primary election day in Pennsylvania is next Tuesday, May 17, and we will learn then just how much Trump’s endorsement and voter enthusiasm had on this race.