The Dolphins continue to keep their playoff hopes alive. A back-and-forth final quarter against the Las Vegas Raiders on Saturday night ended with a game-winning 44-yard field goal from Miami kicker Jason Sanders.

So, who was the quarterback on that drive?

It wasn’t starter Tua Tagovailoa. In fact, the rookie was benched in favor of Ryan Fitzpatrick for a majority of the fourth quarter. The long-time NFL journeyman was the one who saved the season. He did it with three different scoring drives, including the one with the game-winning field goal.

That is now the second time Fitzpatrick has come in for Tagovailoa and made Miami’s offense look better. And yet, head coach Brian Flores remains loyal to the No. 5 pick in the 2020 NFL Draft.

Following the game, Flores made it clear that Tagovailoa would remain the team’s starter against the Buffalo Bills in Week 17.

“If we’ve got to go to our relief pitcher in the ninth, that’s what we’ll do,” Flores said, via a tweet from Adam Schefter. “Fitz (Ryan Fitzpatrick), he’s always ready to go.”

The loyalty to the rookie is commendable, but is it the right move? If the Dolphins win against Buffalo next Sunday, they will more than likely be in the playoffs. Lose that game, however, and it’s probably game over.

Here is how the numbers stack up for Miami’s two quarterbacks in Week 16:

It seems like offensive coordinator Chan Gailey calls plays more confidently when Fitzpatrick is in the game. There are clearly training wheels on Tagovailoa, and it’s hindering Miami’s success offensively.

Either cut him loose or turn to Fitzpatrick for the rest of the season. Flores might be confident in the closer approach, but that isn’t a sustainable plan. The Dolphins should be in playoff mode right now, and what we saw for three quarters isn’t going to be enough to get it done. 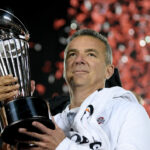 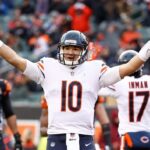