A video emerged during the final stages of the McRib Farewell Tour that threatens to tarnish the legacy of the sandwich.

On Tuesday, a McDonald’s worker uploaded a video to reveal how the restaurant “cooks” each McRib sandwich. Suffice it to say a debate about the edibility of the sandwich ensued. And rightfully so:

Can this even be considered food? A McDonald’s worker decides to reveal how a McRib is made. pic.twitter.com/yFraU7JGhp 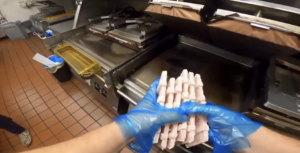 The process begins by thawing frozen blocks of  — let’s say — “rubber” before drenching them in containers of thick brown sauce. Calling the spongey slabs meat seems aggressive and perhaps inaccurate.

Over 2.9 million Twitter users have viewed the above clip. McDonald’s consumers are intrigued as well as disgusted. The New York Post counted 3,000 users who commented negatively on the video. The consensus opinion is that one shall never eat another McRib sandwich.

The employee who uploaded this video must have been rather disgruntled to bury the McRib on its way out of the door. The restaurant announced earlier this month the McRib Farewell Tour would wrap up shortly.

McDonald’s corporate leaders best implement a policy to prevent future videos revealing the gruesome practices that lead to a McDonald’s order. Trust us when we say the McRib is not the only item with such nasty origins.

Have you ever wondered how McDonald’s makes McNuggets or its “burgers”? Us either. It’s best not to know.

Same goes for your favorite items on the Taco Bell menu. In 2011, an Alabama law firm filed a lawsuit that accused the fast food chain of serving “seasoned beef” that contained only 35% beef. Taco Bell fired back in a dubiously-written claim that says its beef is 88% beef and 12% filler. Skeptics suggest the true percentage could be somewhere in between.