UFC big boy Derrick Lewis, nicknamed “The Black Beast” wasn’t scheduled to fight today, but that quickly changed when he went ground and pound on some moron who decided to break into Lewis’ SUV at a park in Houston. Wrong move, bro.

The 6’3, 263-pound Lewis, who is 4-0 in the UFC since a 2019 loss to Junior Dos Santos, told UFC Insider Ariel Helwani that he “knocked the man out,” before the Houston cops showed up to scoop the punk off the pavement — with his head wrapped up — and throw him into a cruiser for a trip to jail. Lewis says the dumb thief was trying to break into his SUV when “The Black Beast” caught him in the act.

“Mofo pick right/wrong car to break into. HE’S OK #herbdeanfault,” Lewis wrote on Instagram. Imagine this guy getting his hands on an opponent who was giving up serious weight, skill and overall size. Not good.

Someone tried to break into Derrick Lewis' car 🤦 (via @Thebeast_ufc) pic.twitter.com/1wEE4O2SZL

Derrick Lewis tells me he noticed a man trying to break into his SUV this morning. He knocked the man out. The police then apprehended him.

I believe the correct thing to say here is, “he’s ok.”https://t.co/3IVUFKlQBL 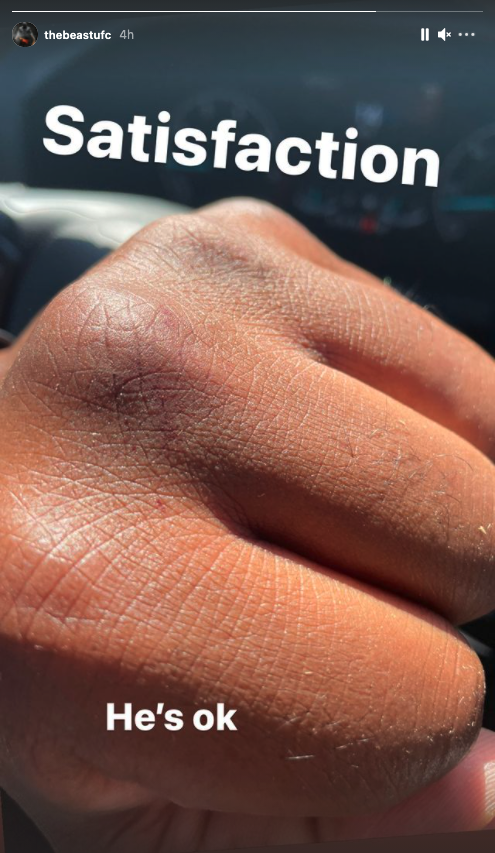