Hosting a primetime cable news show because you are the son of a former governor and the brother of a current governor isn’t an easy life. Sometimes you are forced to make tough decisions, like ignoring a bombshell report that puts your big brother in a bad light.

Thursday night, a few hours before primetime cable news went live, the New York Post reported that Gov. Andrew Cuomo and members of his administration withheld information on nursing home deaths so that the feds wouldn’t find out about them.

“Wait, what are you talking about?” CNN viewers will ask.

“Gov. Andrew Cuomo’s top aide privately apologized to Democratic lawmakers for withholding the state’s nursing home death toll from COVID-19 — telling them ‘we froze’ out of fear that the true numbers would ‘be used against us’ by federal prosecutors,” The Post reports.

To most, this news regarding Big Brother Cuomo and his Emmy-award winning performance regarding COVID is an eye-opener and well worth a headline. The New York Times, AP and other major platforms agree and have reported the story. Yet for some reason, the story hasn’t made it to CNN’s signature primetime show, Cuomo Prime Time. (Great name for a show, by the way.)

You may counter and say, “well, maybe Cuomo Jr. — who lifts big weights that may or may not be real — doesn’t cover his brother.”

Oh but he does. In fact, Big Cuomo is a frequent guest on Cuomo Prime Time.

Per CNN transcripts, the non-weightlifting Cuomo has been interviewed on CNN at least 47 times since the beginning of March 2020, 10 of them by his brother.

Gov. Cuomo even has his own nickname on the program, the “Love Gov.” 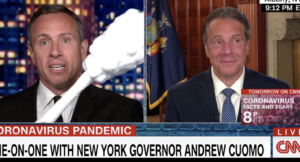 Cuomo the younger must have left his hard-hitting journalism days behind him. I mean, he was really swinging this summer, questioning COVID data from other governors:

Can we trust the data from florida’s governor? https://t.co/1rLT3YzUYe

We don’t know, but we do know that Florida’s AG has not accused Gov. DeSantis of doctoring any COVID numbers. However, the AG of NY has accused Gov. Cuomo of undercounting nursing home deaths by 50%. CNN viewers won’t get that reference since that story didn’t make its airwaves either. Luckily, I summed it up for them last month:

New York Gov. Andrew Cuomo is a disaster, but his incompetence may stretch beyond the level he has already shown. According to a 76-page report cited in the New York Times on Thursday, New York State Attorney General and fellow Democrat Letitia James has accused Cuomo and his administration of undercounting coronavirus-related deaths at nursing homes by as much as 50%.

In simple terms, Cuomo’s administration is accused of hiding the correct estimate of coronavirus-related nursing home deaths by counting only the deaths that occurred in nursing homes and not the patients who died after being transferred from nursing homes to the hospital. If this allegation is correct, the current tally of 8,500 nursing home deaths is substantially undercounted.

Since The Post‘s report came out, CNN has dedicated a total of 3 minutes to it. Maybe it’ll make the lede on this Sunday’s Reliable Sources?