University of Illinois computer science professor Dr. Sheldon Jacobson called his shot during a June 2020 interview with CBS Sports reporter Dennis Dodd. It was going to happen, Jacobson said. He guaranteed it like Joe Namath telling reporters the Jets were going to shock the world. College football at the FBS level was going to see death if it tried to play a college football season.

“I guarantee someone is going to die,” Jacobson told Dodd. Not only was someone going to die, but the FBS level would see 3-7 deaths from COVID.

“A few of them could end up in the hospital, and you’ll have a small number who could die,” Jacobson said. “I don’t want to sugar coat it for you. I just want to give you the facts. … If everybody comes together under normal circumstances, we’ll probably see that kind of outcome.”

The college football season ended Monday night with Alabama curbstomping Ohio State 52-24. The confetti rained down on national champion Alabama without a single death at the FBS level, like Jacobson guaranteed.

“There were those that I think made every effort to communicate why we shouldn’t try to play,” SEC commissioner Greg Sankey told Sports Illustrated’s Ross Dellenger as the conference prepared to win yet another title. “They shamed the effort for trying. I think we did a lot right.”

Sankey told Dellenger he doesn’t have regrets over the decisions he made.

“We made the best judgments we could. I have people who say, ‘Did you make the right decision?’ If you go back and look at the information we had at the time of the decision, absolutely. But you’re going to be judged on outcomes, and we’re here [playing the national championship] and people have to judge the outcomes. People have stayed healthy. COVID hasn’t spread in games. We had to adjust and adapt,” Sankey said.

Eventually, Dr. Jacobson changed his death prediction as it became more evident that there would be a college football season. “I’m trying to find a reason to tell you we shouldn’t play football. I haven’t found it yet,” Jacobson said in August. But, for some programs, it was too late. The death fear had been implanted in brains, and the Pac-12 had made up its mind not to play. The Pac-12 reconsidered only when the Big Ten changed its mind due to public pressure.

In August, Jacobson also updated his trusty computer data to predict 0.59 to 1.68 deaths at the FBS level. By December, Jacobson had moved on to predicting death for college basketball coaches.

“This means that if 48 of these coaches become infected and display symptoms, the chance of one fatality is real. By comparison, the case-fatality rate for the players is 1 in 1,800, which means that the individual fatality risk to the players is negligible, though with enough symptomatic infections, the population risk is quantifiable.” 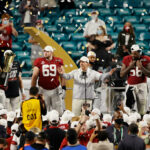 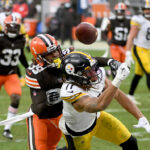