CNN reporter Laura Jarrett — the daughter of Laura Jarrett, a former Obama adviser — says to leave the vile protestors outside the homes of conservative Supreme Court Justices alone. Don’t talk negatively about them, she requests kindly.

“I think for a lot of people, a conversation about civility feels like it misses the mark when constitutional rights that you believe that you had for over 50 years are about to be overturned,” Jarrett declared on New Day Monday.

What's in the water at CNN?

Today, CNN's Laura Jarrett defended protesting outside of justices’ homes: “For a lot of people a conversation about civility feels like it misses the mark…"pic.twitter.com/5FVYJELBrA

The hell with civility and states rights, Jarrett says.

“So yes, there are going to be protests in front of Kavanaugh’s house because people are angry, and as long as they stay nonviolent, I think for most of the people who are watching it, you can understand where they’re coming from, even if you may think politically it’s not the right thing, you can understand sort of where that animated feeling is coming from,” Jarrett goes on.

While downplaying non-peaceful protests is not unusual on CNN — “Please, show me where it says protesters are supposed to be polite and peaceful,” then-primetime CNN host Chris Cuomo said in 2020 — excusing protests outside private property is a new one.

What the protestors did outside the homes of Brett Kavanaugh and Chief John Roberts this weekend was an act of intimidation.

And intimidation is the likely reason why someone in the Supreme Court leaked a draft last week revealing that five justices voted privately to overturn Roe v. Wade; perhaps to pressure a conservative justice into their changing their vote.

Though Kavanaugh and Roberts got it this weekend, abortion rights activists plan to visit the homes of Samuel Alito, Amy Coney Barrett, Neil Gorsuch and Clarence Thomas next.

Meanwhile, on New Day, show host Brianna Keilar read a script about the thugs who firebombed a pro-life center in Madison, Wisconsin, spraying the sentence “If abortions aren’t safe then you aren’t either” on the wall. 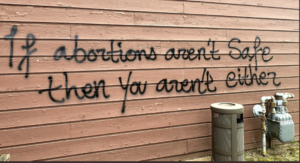 But according to NewsBusters, Jarrett didn’t appear during that segment, so no one has defended this specific case of vandalism yet on CNN.

“Civility feels like it misses the mark.” Remember that line.