New CNN President Chris Licht is evaluating its partisan pundits to see if they can adapt to the planned news-first pivot at the network.

Three sources familiar with the matter tell Axios that Licht will consider firing the talents who cannot adjust to a less partisan tone and strategy.

But each pundit will get a chance to prove their journalistic bones.

“Licht wants to give personalities that may appear polarizing a chance to prove they’re willing to uphold the network’s values so that they don’t tarnish CNN’s journalism brand,” the report details. 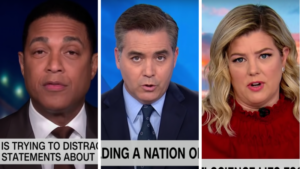 Darcy and Acosta will have no problem undergoing character changes to fit a new company direction. They are stooges who follow orders.

However, Lemon and Keilar are devoted partisans who will not accept a fact-first edict. To tone down or eventually fire either Lemon or Keilar would take a backbone Discovery has not shown it has.

One can quickly imagine the headlines if the press finds out Licht, a white man, punished black and female talents for spreading woke messaging. The New York Times and Media Matters are waiting to pounce.

I remain skeptical that Licht will be able to drown out the partisans as planned. At first, Licht may have to settle for amplifying Jake Tapper, Clarissa Ward and Wolf Blitzer to offset the negative headline-makers.

Second, there are concerns that CNN can find an audience for content that’s not skewed in favor of a political ideology in such a divided culture.

Saving CNN’s cratering ratings will be just as important to Discovery as reshaping the image of the network. Make no mistake about that.

CNN risks losing ardent liberals to MSNBC if it begins reporting the facts. It’s also doubtful that former conservative viewers will give CNN another chance, even under new management.

The first test will come this fall when Licht fills the vacant 9 pm hour, which Chris Cuomo hosted until December 2021. Speculation inside CNN suggests that Licht will convert the traditionally-opinionated hour into a newscast.

In the meantime, Acosta, Lemon, Keilar and the others continue to warn Americans that three evil men — Donald Trump, Elon Musk and Ron DeSantis — are coming for their safety. Tune in to CNN for that warning later today.