ESPN announced their new radio lineup this week. Notably, Golic & Wingo is getting replaced by Zubin Mehenti, Keyshawn Johnson, and Jay Williams. This means Mike Golic’s 20-year run in the mornings on ESPN Radio is coming to an end in the next month. The news on Mehenti, Johnson, and Williams was first reported by the New York Post.

With Mike Greenberg getting a new radio show in afternoons, one Twitter user asked Mike Golic’s wife, Christine, about a potential Mike & Mike reunion. To this she replied that her Mike pitched this idea to ESPN, which said no: 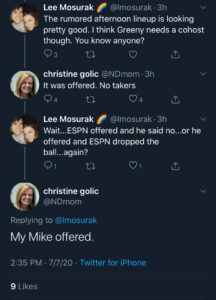 It is going to be very interesting to see what’s next for Golic. There’s no sign that he’s ready to ride off into the sunset just yet, though he surely has the resources to retire. Any guesses about landing spots would be pure speculation at this point, but let’s do that anyway: SiriusXM? NFL Network? CBS?

In any event, the next few weeks will be a bittersweet victory lap for him as the company that is moving on from him nonetheless lauds his accomplishments there. It’s a safe bet that the final week of shows, which concludes July 31st, will be both nostalgic and emotional.