It’s a big day for patio bars, garage bars, driveway tailgating, and any other way to watch the NFL where fans aren’t allowed into stadiums. In Keswick, Ontario, Bills fans are watching Josh Allen and the team tear up the Jets at their 12-foot Bills helmet bar that once served as a sandbox before the owners came to their senses and realized they had an iconic bar on their hands.

This summer, Bills Helmet Bar owner Blake Parnham told the Buffalo News the helmet has a unique history that goes back to the early 1990s. Blake’s father was a school teacher who would put Bills stickers on assignments that would then go home for parents to see. The mother of one of Parnham’s students takes the story from here and it involves a sporting goods store that needed to get rid of the helmet. It’s one of the craziest giant NFL helmet stories you’ll ever read.

Long story short, the mother tracked down Blake’s father to tell him she’d found a massive Bills helmet that he needed to acquire. Blake’s dad, and some buddies, went and got the helmet, but dad didn’t have a place to keep it. A friend stepped in until Blake’s mom and dad could get a bigger place. Eventually, the family upgraded its living arrangements and Blake’s dad turned it into a sandbox in 1996.

Blake got older, the sandbox was turned into a woodpile shelter. Fast-forward to 2019. Blake started thinking of a project and the birth of the Bills Helmet Bar was underway. The NFL became aware of the helmet and sent out a photo on social media, leading to the bar to become one of those places Bills fans want to see and show their respects.

“It’s been a wild ride, and when the pandemic finally clears up, I’d love to play catch in the yard and serve a beer to one of those guys,” Parnham told the Buffalo News. “It’s just a backyard – we’re obviously not licensed and so we can’t legitimately become a bar, but our goal is to have a bunch of Bills fans over to enjoy the upcoming season.”

And yes, Blake will let you get married at the helmet.

What a great visit to the one and only @BillsHelmetBar ! Truly honoured to have met the family and thank you for allowing us to see the truly awesome helmet! #BillsMafia you got to see this! pic.twitter.com/j6WDhxszKe

This time two weeks from now, #BillsMafia will be collectively celebrating 1-0. For now, it’s working from home with a view. 😍 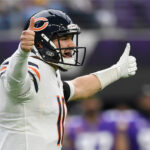 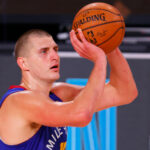