Italian tennis star Camila Giorgi made waves this past weekend during the French Open, though the focus had been on her attire rather than her performance. And now that performance has come to an end.

Giorgi, whom umpires called out for inappropriate sponsorship endorsements on her apparel, dropped straight sets to Daria Kasatkina of Russia on Monday in the fourth round and is now out of the competition.

On Saturday, French Open officials got testy when they saw the name of kitchen appliance manufacturer DeLonghi emblazed on Giorgi’s chest. 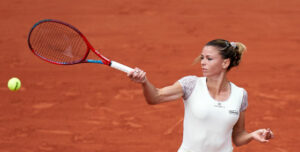 At the time, Giorgi insisted she had no wardrobe alternative.

“I don’t have any change. This is my only dress. I played with it before,” she said.

On Monday, she managed to relocate the sponsor ad to her sleeve, but it didn’t help her on the court.

Despite what Polonius of Hamlet says, we know that apparel doth not proclaim the man. Or the woman. Giorgi now goes home and Kasatkina advances to the French Open quarterfinal, where she’ll face her fellow countrywoman Veronika Kudermetova.