With less than a week left on the network, CNN anchor Brooke Baldwin chose to blast her bosses on the way out of the door.

“The most influential anchors on our network, the highest-paid, are men,” Baldwin said on the Ms. Magazine podcast. “My bosses, my executives, are men. The person who oversees CNN Dayside is a man, and my executive producer for 10 years is a man.

“I was surrounded by a lot of dudes,” Baldwin concludes.

Embedded there are quite the accusations. Without spelling it out, Baldwin is accusing her soon-to-be former employer of not paying and promoting women well. Her interview is currently trending high on Twitter and has been picked up by nearly every website. Translation: it made CNN’s morning meetings (which, hopefully, have not been recorded this time).

Now, I’ve long said that the country as a whole needs to move away from this idea that each company must meet undefined gender and racial quotas to avoid hit pieces from CNN, The New York Times, and now 60 Minutes. Networks in particular should serve their viewers by putting the best candidates in each spot. That said, I’ve also long called out hypocrisy, and as so often happens, CNN is guilty of that here.

CNN is at the forefront of calling, well, everyone sexist and racist. The network looks for opportunities to do so almost daily. If a report found that Fox News or a right-leaning network didn’t have as many female anchors as its competitors, would the topic make CNN’s website? Of course it would. It’d make CNN primetime lineup.

Maybe even on this guy’s show: 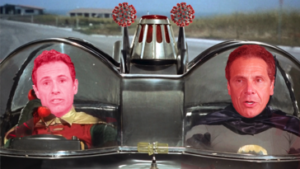 So if CNN believes Anderson Cooper, Chris Cuomo, and Don Lemon are its three best personalities — I’m not sure how it could. I mean, have they watched Don Lemon? — they should be the three in primetime. I have no issue with that, however, CNN certainly would if it happened elsewhere. Alisyn Camerota would probably lead the charge.

I've been warning for years, liberals are hypocrites who are exactly what they accuse you of being "Departing CNN anchor Brooke Baldwin airs grievances with lack of women in key roles at liberal network" https://t.co/Qibm2c2udB

No matter how good it feels, no matter how much they deserve it, no matter how many Retweets you think it will get you, never badmouth your employer/significant other on the way out the door. The next potential one is watching. And taking notes. https://t.co/oON4TZyTTS

By the way, since Brooke Baldwin is trending and in the headlines, I’ll make it easy for the folks out there. Here’s the clip you’re looking for:

In honor of @BrookeBaldwin leaving @cnn, here is the most watched segment of her broadcasting career. Enjoy: pic.twitter.com/8x3zQusWyf