Brandon Marshall made quite the argument against the New York Jets drafting Zach Wilson during Tuesday’s episode of First Things First. He dialed up a he won’t be able to handle the New York media attack against Wilson.

“Do you really want to put Zach Wilson into this environment? We keep talking about the New York media. You have to be cut from a certain type of cloth. This dude…has been tucked away in BYU,” Marshall said.

The 13-year NFL vet believes that Justin Fields, who spent one year handling the media attention at Ohio State and another year jumping on Zoom calls, is cut from the perfect cloth to handle the media pressure awaiting a new Jets quarterback.

“He’s cut for this type of environment,” Marshall explained. “You go get Justin Fields because he can handle this New York media.”

Marshall doesn’t have any clue whether Wilson’s cut out for the New York environment, and he doesn’t have a clue whether Fields would fare any better. Was the New York media even that hard on Sam Darnold? This isn’t the 1990s when pitbull columnists came after starting quarterbacks four times a week in the middle of a tabloid war. The New York Daily News doesn’t even have a newsroom these days. Marshall’s acting like there’s no way the Jets could throw Wilson to the wolves. Uh, yeah they can. It’s called bringing in The Athletic, ESPN, CBS, SI and any other outlets that want further access to their quarterback. Those outlets that play by the rules get expanded access. What about talk radio? Again, this isn’t 2002. Hypothetical ‘Bill the Plumber’ is now cashing huge union retirement checks in Florida and hasn’t bothered calling in to blast a QB in years.

This isn’t rocket science, but then again this is Brandon Marshall we’re talking about. The same guy who said two months ago that the Jets should go all-in to get Deshaun Watson.

This might’ve been the most heat Sam Darnold took over the last few years: 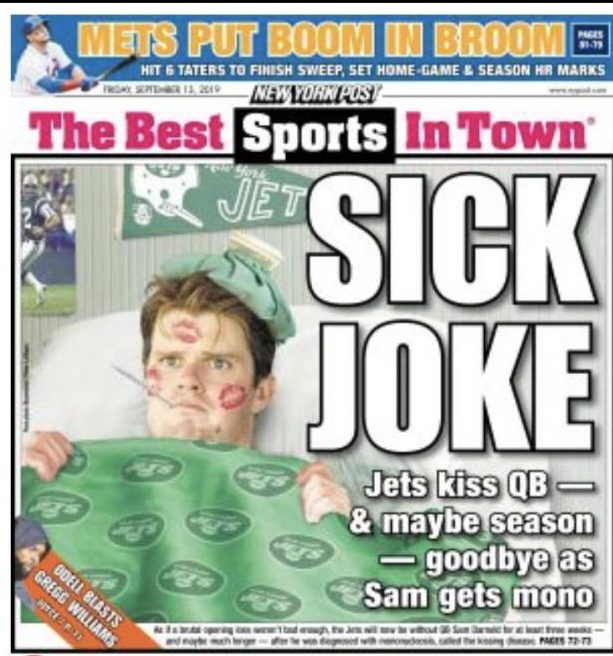 What's the best option for the Jets at No. 2?

"The Jets have to draft a QB and trade Sam Darnold. …. This is the moment to get it right. Go get Justin Fields bc he can handle the New York media. He has all of the tangibles to lead the Jets for the next 15 years." — @BMarshall pic.twitter.com/PH6YHHIHc7