Industry sources tell OutKick that Marshall’s contract runs through the end of the month, and he has mutually agreed to part ways with Fox Sports.

Fox added Marshall as a co-host with Kevin Wildes, Nick Wright, and Jenna Wolfe on the show last August. Fox Sports plans to use a rotation of in-house analysts alongside Wildes, Wright, and Wolfe by the start of the football season, sources add. 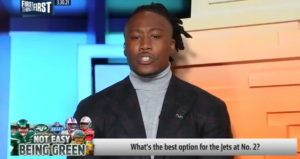 Marshall will continue his other various roles outside of Fox. Red Table Talk Productions announced this week it is developing a mental health roundtable series, The Toughest Opponent, which Marshall will host. In December, Marshall invested $10 million into House of Athlete, a modern gym to help professional and everyday athletes.

In the NFL, Marshall played for the Miami Dolphins, Denver Broncos, Chicago Bears, New York Jets, New York Giants, and the Seattle Seahawks for a total of 13 seasons.