The third episode of Race Theory with Bomani Jones aired on HBO this past Sunday. And like the first two editions, no one watched the third.

For the second straight week, Jones’ show rated so poorly that it failed to chart. Remember, only the top 150 cable shows of the day count and have ratings released to the public. The others are so low that advertisers view these programs as completely irrelevant, a scratch number. So like his former ESPN TV and radio shows that have since been canceled, Jones’ HBO show is completely irrelevant.

Missing the cable charts is humiliating in and of itself, but we can’t overstate how difficult it is to rate this poorly following a popular show like Last Week Tonight with John Oliver. It’s truly impressive Jones is losing around 80% of Oliver’s lead-in viewership. Give the guy his props.

This week, Oliver handed Jones 466,000 viewers, and Jones turned enough of them away that he fell behind something called Botched on E!, which drew 54,000 viewers.

Last week, OutKick learned that Bomani Jones failed to chart because his show drew only 44,000 viewers and a 0.01 TV rating. If we hear the official number for this week, we will let you know, but it’s likely under 50,000 again. For comparison, CNBC aired infomercials at 2 am last Sunday and drew 83,000.

Of course, maybe the innovative smoothie ad is just that appealing. But it’s more likely that audiences are tired of Jones’ race-baiting. 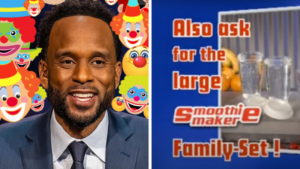 HBO has the option to cancel or renew Race Theory after its sixth episode. In a meritocracy, HBO would have canceled Jones’ show halfway through its pilot. After all, HBO axed Bill Simmons’ program a few years ago for drawing a mere 200,000 viewers, more than Jones could ever draw.

But because Jones has so many allies in the press, allies who are still willing to write puff pieces about him, HBO may retain Jones out of fear. Better to keep Jones on air than to risk accusations of racism.

Anyway, I’m curious whether Bomani Jones’ show is any good? Does anyone know?